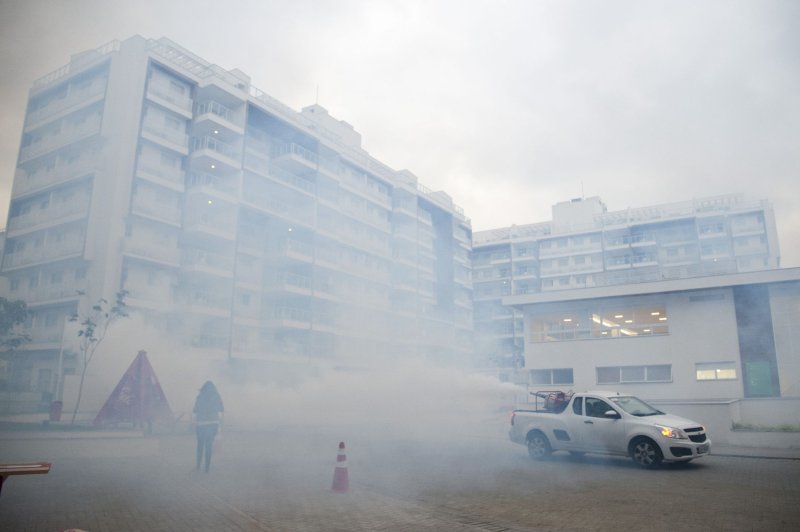 A car spraying for mosquitos drives through the media village at dusk in Rio de Janeiro, Brazil, in July 2016 as part of prevention efforts against mosquito-borne diseases such as Zika. File Photo by Kevin Dietsch/UPI | License Photo

Dec. 31 (UPI) -- The Asian tiger mosquito poses only a minor risk for Zika virus, according to new epidemiological simulations.

The yellow fever mosquito Aedes aegypti is the primary vector for Zika virus, the infectious disease that can spread from mother to fetus, causing congenital deformities.

However, lab experiments have previously shown the Asian tiger mosquito Aedes albopictus can carry and transmit the disease.

In 2019, scientists in France blamed several instances of Zika infection and transmission on the Asian tiger mosquito, an aggressive biter that originates from Southeast Asia but has colonized much of temperate Europe.

Thanks to its ability to survive harsh winters, the Asian tiger mosquito is now found all over the world.

The species is the second-most common vector of viral pathogens in humans, but until now, its ability to trigger major Zika virus outbreaks hadn't been investigated.

For the study, published Thursday in the journal PLOS Pathogens, researchers exposed Asian tiger mosquitoes to the Zika virus and assessed the insect's ability to carry and transmit the virus in variety of lab experiments.

Scientists also modeled the dynamics of Zika virus infection in humans, and designed new epidemiological simulations to gauge the ability of the species to trigger large-scale Zika outbreaks.

The combination of experiments and models showed the greatest risk of Zika transmission occurred during the symptomatic stage of the disease.

During the symptomatic stage, scientists estimated the odds of a mosquito picking up the disease at 20 percent.

"Despite these unfavorable characteristics for transmission, Ae. albopictus was still able to trigger and yield large outbreaks in a simulated environment in the presence of sufficiently high mosquito biting rates," researchers wrote in their paper. "Our results reveal a low but existing epidemic potential of Ae. albopictus for Zika."

Even with a low risk of causing Zika outbreaks in Europe, researchers suggest active surveillance and eradication programs should be deployed to safeguard public health in places with significant Asian tiger mosquito populations.

Science News // 18 hours ago
China rejects 'concern' by NASA chief about Beijing militarizing the moon
July 5 (UPI) -- The Chinese government hit back on Tuesday at the head of the American space program over remarks he made in an interview that suggested Beijing is seeking to militarize the moon.

Science News // 4 days ago
Long-duration space flight equal to decade of bone loss in astronauts, study says
July 1 (UPI) -- Scientists have long known that astronauts lose bone density while in space, but a study published this week found they only partially recover this loss one year after returning to Earth.

Science News // 1 week ago
Miner unearths nearly complete mummified baby woolly mammoth in Canada
A young miner called for backup when his front-end loader unexpectedly struck something in the Canadian permafrost last week on the first day of summer in the Northern Hemisphere.