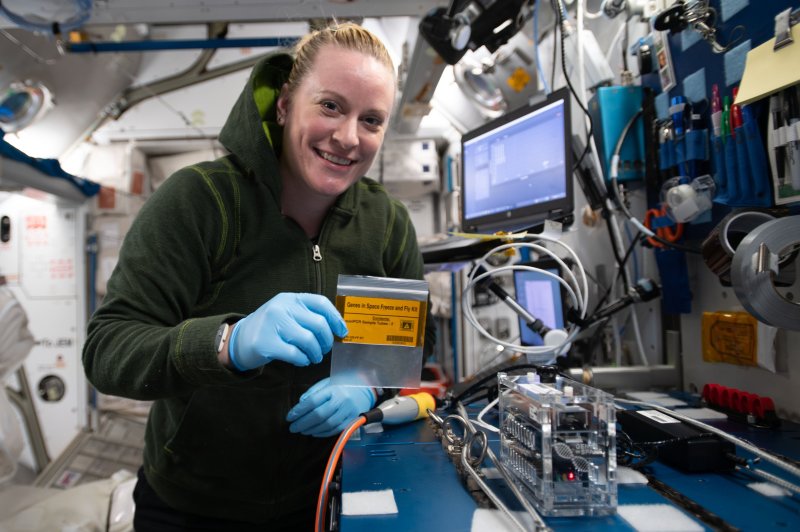 Fruit flies are shown an a laboratory at NASA Ames Research Center in California, where they are raised for experiments aboard the International Space Station. Photo courtesy of NASA

Fruit flies are packed into a small plastic NASA cartridge with food for delivery to the International Space Station. Photo courtesy of NASA

An experiment on the International Space Station will build on the United States' legacy of using fruit flies to understand how life endures in space.

"Of course, it would be ideal to sample astronauts' neural tissue, but we can't do that safely," said Finsam Samson, a student at Stanford University in California and lead investigator for the GIS-7 experiment, which was delivered to the space station on a SpaceX Dragon capsule in November.

"Instead, we can send large numbers of fruit flies, and they are a great organism to study, since there's been groundbreaking work on Earth and in space on fruit flies already," Samson said.

NASA astronaut Kate Rubins conducted a genetics test known as a polymerase chain reaction on the genetic matter to tease out portions of it that are related to circadian rhythm.

Astronauts aboard the station then froze the sample for return to Earth, where scientists will examine the substance to ensure the process works properly in microgravity.

The experiment is due to return on SpaceX's Dragon capsule re-entry, planned for Jan. 11.

The United States first sent fruit flies into space in 1947 as the first living things intentionally launched beyond the atmosphere. At that time, scientists merely wanted to know if life could survive in space, and the insects were recovered alive, according to military and NASA records.

Fruit flies have been used since then due to their small size and their 24-hour circadian rhythm, which is similar to humans, Samson said. NASA maintains a fruit fly "farm" or laboratory for such uses at the agency's Ames Research Center in Mountain View, Calif.

NASA astronaut Kate Rubins recently analyzed some of the flies' genetic material as part of the Genes in Space experiment on board the space station, Samson said.

The Genes in Space program is sponsored by Boeing and Cambridge, Mass.-based company miniPCR bio, which makes genetic testing kits.

The experiment sets up protocols, or work flow, for more fruit fly missions planned in the next decade, said Emily Gleason, biologist and curriculum specialist with miniPCR.

"We're showing that the technology can work in microgravity, to detect the expression of certain genes," Gleason said.

"We know that astronauts and other living things are impacted by microgravity, but until recently we have been unable to study that at a molecular or genetic level," she said.

"These experiments set the stage to do that, which could help to monitor astronaut health for deep space missions."

Samson, as a high school senior in 2019, won a Genes in Space competition to use advanced DNA sampling methods in space experiments with fellow student Yujie Wang.