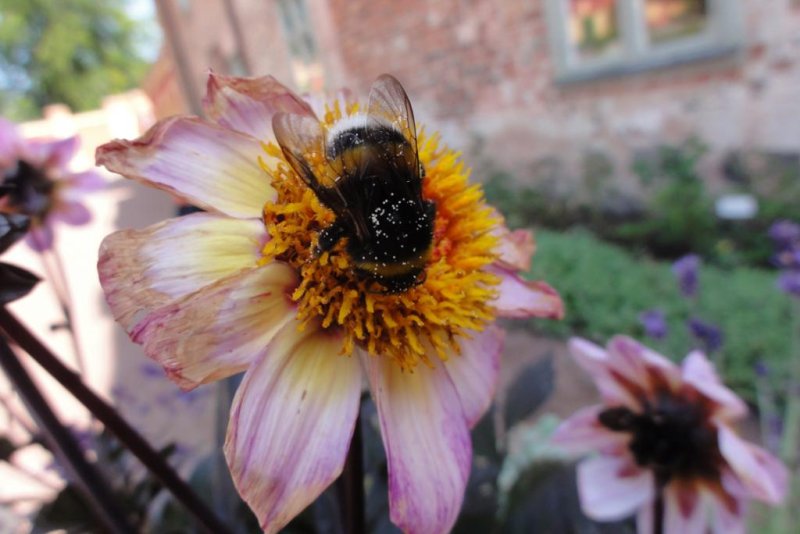 Larger bumblebees learn the locations of the best flowers, according to new research, while smaller ones can't afford to be as selective. Photo by Natalie Hempel de Ibarra

Dec. 28 (UPI) -- The biggest bumblebees use "learning flights" to memorize the locations of the best flowers, according to new research.

Researchers already knew bumblebees perform learning flights, turning to look back from different angles as they depart a flower, after collecting nectar.

For the new study, published Monday in the journal Current Biology, scientists looked at how learning flight behavior differs among big and small bumblebees.

"It might not be widely known that pollinating insects learn and develop individual flower preferences, but in fact bumblebees are selective," study co-author Natalie Hempel de Ibarra said in a news release.

"On leaving a flower, they can actively decide how much effort to put into remembering its location," said Hempel de Ibarra, an associate professor at Exeter University's Center for Research in Animal Behavior.

For the experiment, researchers presented bumblebees in greenhouses with plots of artificial flowers, each filled with solutions containing varying concentrations of sucrose.

Observations showed larger bumblebees altered their learning flight behavior based on the sweetness of a flower's nectar reserves.

"The differences we found reflect the different roles of bees in their colonies," said Hempel de Ibarra.

"Large bumblebees can carry larger loads and explore further from the nest than smaller ones. Small ones with a smaller flight range and carrying capacity cannot afford to be as selective, so they accept a wider range of flowers," she said.

According to the study's authors, smaller bees tend to be more heavily involved in work inside the hive, foraging only when there is an especially high need for food and reserves are running low.