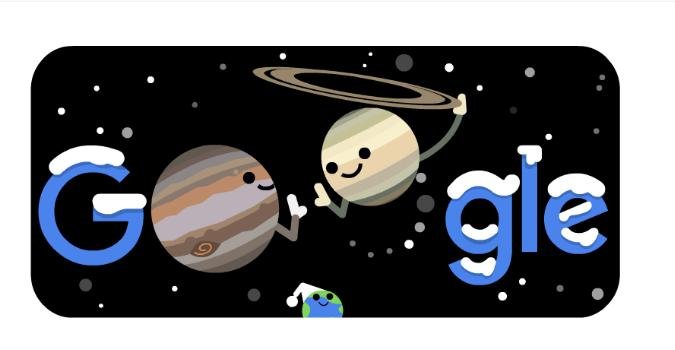 Google is celebrating the overlapping of Jupiter and Saturn known as the Great Conjunction, with a new Doodle. Image courtesy of Google.

Dec. 21 (UPI) -- Google is celebrating a rare occurrence between Jupiter and Saturn known as the great conjunction, with a new Doodle.

Jupiter and Saturn, the two largest planets in the solar system, will nearly overlap as they cross within .1 degrees of each other an hour after sunset on Monday.

The event hasn't been seen since the Middle Ages. The two planets will actually remain 450 million miles apart but will appear closer.

Jupiter, an hour after sunset, will be easily visible in the southwestern sky. Saturn will be fainter and appear slightly above and to the left of Jupiter until Dec. 21 when Jupiter will overtake it and the planets reverse positions in the sky.

Google's homepage pays homage to the great conjunction and features an animated sequence of Saturn and Jupiter giving each other a high five.