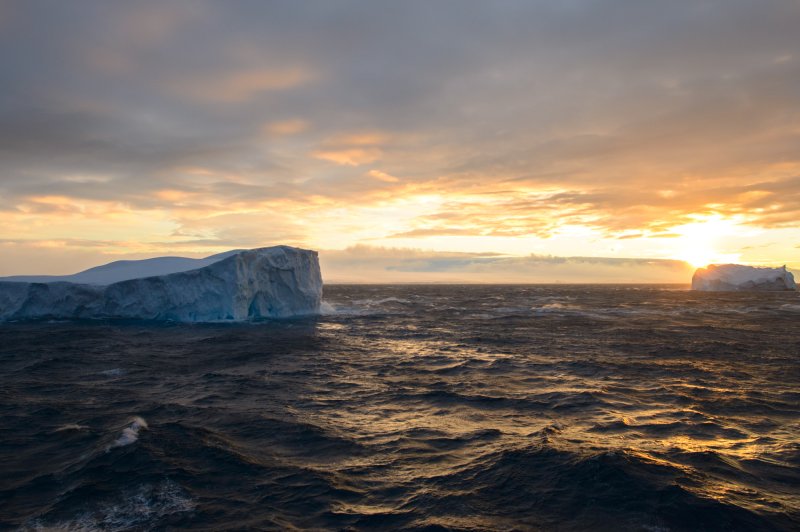 These glacial-interglacial cycles correspond with increases and decreases in the concentration of carbon dioxide in the atmosphere, but nobody has been able to figure out exactly what drives the pattern.

Wind-driven upwelling causes the ocean layers to turn-over more rapidly, bringing cold, CO2-rich water from the ocean's depths to the surface, where carbon can escape more readily into the atmosphere. The process also helps bring oxygen and nutrients to the surface, fueling biological activity.

Because the Southern Ocean is connected to all of the planet's other oceans, the Indian, Atlantic and Pacific, its overturning action works to distribute heat, nutrients, salt, oxygen and CO2 throughout.

Increasingly, researchers are becoming aware of the system's sensitivity to changes in wind and its influence on other other climate patterns.

"The cause of the ice ages is one of the great unsolved problems in the geosciences," Daniel Sigman said in a news release.

Researchers in the 1970s revealed atmospheric CO2 levels during the ice ages were 30 percent lower on average than during interglacial periods.

Subsequent studies have suggested excess carbon remained trapped in the deep ocean during the ice ages, but scientists have failed to settle on an explanation for such a pattern.

For the new study, researchers reconstructed a detailed record of chemical changes in the Southern Ocean by analyzing the levels of nitrogen isotopes in the fossilized shells of diatoms -- free-floating surface algae -- trapped in layers of ancient marine sediment.

Diatoms grow in great abundance in Antarctic surface waters, their shells trapping organic compounds as they grow. When diatoms perish and sink to the bottom of the ocean, their shells carry a signature of the unused nitrogen that was available in the ocean at the time of their deaths.

The ancient fossils allowed researchers to compile a history of shifting nitrogen concentrations in the Southern Ocean over the past 150,000 years, spanning two ice ages and two interglacial periods.

"The more upwelling that occurs in the Antarctic, the higher the nitrogen concentration in the surface water. So our results also allowed us to reconstruct Antarctic upwelling changes," said Ai, a Princeton graduate student.

By comparing the geochemical signatures of ocean temperature changes found in the sediment cores to change signatures trapped in Antarctic ice cores, researchers were able to precisely date the sediment layers from which the diatom fossils were derived.

"This allowed us to connect many features in the diatom nitrogen record to coincident climate and ocean changes from across the globe," said co-author Alfredo Martínez-García.

"In particular, we are now able to pin down the timing of upwelling decline, when climate starts to cool, as well as to connect upwelling changes in the Antarctic with the fast climate oscillations during ice ages," said Martínez-García, a researcher at the Max Planck Institute for Chemistry in Germany.

The combination of precisely calibrated timelines -- for both ocean chemical and climate changes -- allowed scientists to link wind pattern shifts with changes in the Southern Ocean's upwelling pattern, changes that altered the planet's carbon cycle.

"Our findings show that upwelling-driven atmospheric CO2 change was central to the cycles, but not always in the way that many of us had assumed," said Daniel Sigman, study co-author and Princeton professor. "For example, rather than accelerating the descent into the ice ages, Antarctic upwelling caused CO2 changes that prolonged the warmest climates."

Researchers expect their findings to improve models designed to anticipate global warming's impact on the Southern Ocean and Antarctic climate.

"The new findings suggest that the atmosphere and ocean around Antarctica will change greatly in the coming century," said Ai. "However, because the CO2 from fossil fuel burning is unique to the current times, more work is needed to understand how Antarctic Ocean changes will affect the rate at which the ocean absorbs this CO2."