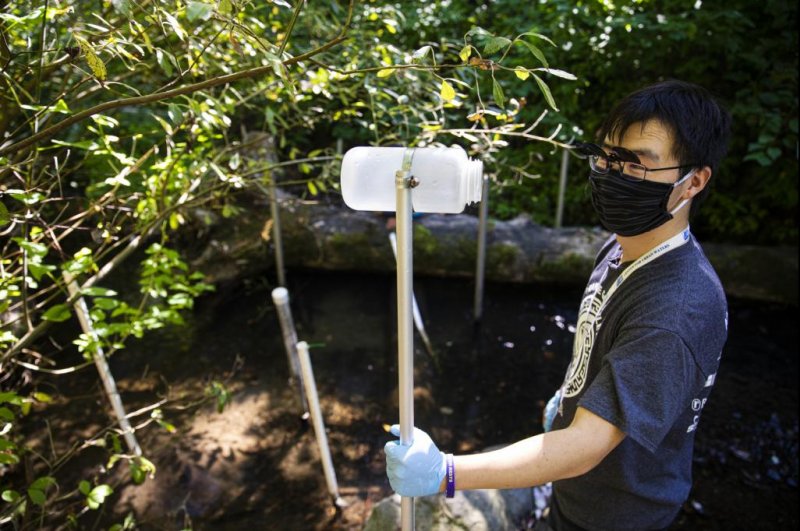 Dec. 3 (UPI) -- Almost all Pacific salmon die shortly after spawning, with the nutrients from their decaying carcasses offering nourishment to the next generation.

In many urban waterways, however, hundreds of salmon die before spawning, never getting the chance to deposit their eggs on the riverbed.

"Mortality rates in pristine streams are less than 1 percent, while urban creeks can have over 90 percent mortality prior to spawning," Edward Kolodziej, an associate professor of civil and environmental engineering at the University of Washington, told UPI in an email.

Now, thanks to the work of Kolodziej his research partners, scientists know what's killing salmon who venture too close to urban centers -- 6PPD-quinone, the derivative of a chemical additive that keeps rubber tires from breaking down too quickly.

Kolodziej is one of several co-authors of a new paper, published Thursday in the journal Science, describing the toxin's role in coho salmon die-offs.

RELATED Alaska's salmon are getting smaller

The fish, bound for spawning grounds, would list sideways and swim in circles. Eventually, the fish would roll over and die in large numbers.

"Documented reports that urban stormwater killed coho salmon have existed in Washington State since the 1980s," Kolodziej said. "In Seattle, documentation began with mortality observations in urban creeks in the 1990s, and for the last 20-plus years, Nat Scholz, Jay Davis and Jen McIntyre have worked to document and understand coho mortality arising from stormwater exposure."

As part of their work, researchers -- including Scholz, Davis and McIntyre, all co-authors of the new study -- began testing the stormwater runoff near streams where coho salmon were turning up dead. In the lab, researchers divided the stormwater based on different chemical properties.

For example, scientists divided the water into metal and non-metal solutions. This allowed researchers to eliminate large numbers of toxins when a mixture failed to trigger symptoms consistent with urban runoff mortality syndrome.

Researchers were able to eliminate flame retardants, plasticizers and other groups from their list of suspects. Eventually, the scientists narrowed their search to just a few chemicals, including one unknown compound that appeared to dominate the mixture.

Researchers were able to identify the likely culprit's chemical composition -- they knew it had 18 carbons, 22 hydrogens, two nitrogens and two oxygens -- but they didn't have a name for it. The chemical fingerprint failed to match anything in the database of known chemicals.

Finally, Zhenyu Tian, a research scientist at the University of Washington's Center for Urban Waters, realized the compound may not be a chemical used in the direct construction of rubber tires, but one added post-production. He also guessed their culprit was likely to derivative of a tire additive, not the additive itself.

Tian's hunch was right. A common preservative used to protect tires from degradation via ground level ozone, a chemical called 6PPD, was a near match for their compound's composition -- with the same ratio of carbon and nitrogen molecules. When 6PPD hits the road and reacts with ozone, it forms 6PPD-quinone -- the unnamed compound scientists isolated in the lab.

Followup experiments showed that, even in tiny quantities, 6PPD-quinone is extremely deadly to juvenile coho salmon.

Scientists regularly monitor temperature and oxygen levels -- as well as infamous industrial toxins like mercury and lead -- in streams and rivers important to aquatic species, but the latest research is a reminder that a variety of little-understood chemicals are regularly washed into local waterways.

According to Kolodziej, followup studies to determine the prevalence of 6PPD-quinone in the environment -- and its implications for fish and other -- are underway.