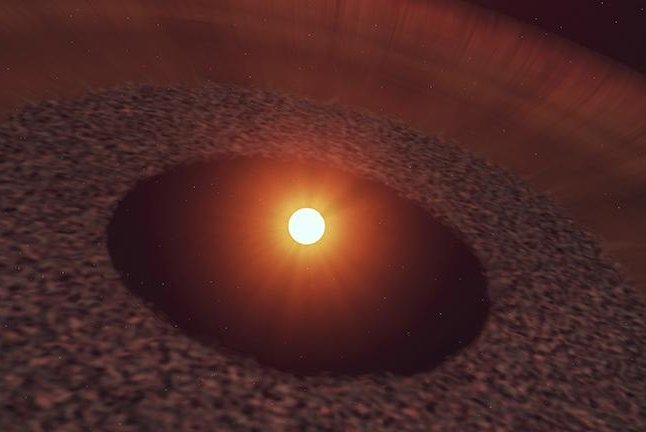 An artistic rendering shows carbon monoxide emanating from the debris ring surrounding the No Lup star system. Photo by Institute of Astronomy

Astronomers suggest this unique stage of a planetary system could offer scientists fresh insights into the birth and development of our own solar system.

The discovery is scheduled to be presented next week at the Five Years After HL Tau virtual conference. The research has also been accepted for publication in the journal Monthly Notices of the Royal Astronomical Society.

The outflow of carbon dioxide was first spotted during the survey of young "class III" stars by the Atacama Large Millimetre/submillimetre Array in Chile. Some of these young, low-mass stars host debris rings created by the collision of comets, asteroids and planetesimals.

Because the debris from these collisions absorb and reradiate the energy of their host star, these rings can be detected by ALMA.

Around one star, named "NO Lup," researchers detected both the glow of a debris and the signature of fast-flowing carbon monoxide.

"Just detecting carbon monoxide gas was exciting, since no other young stars of this type had been previously imaged by ALMA," astronomer Joshua Lovell, co-author of the soon-to-be-published study, said in a news release.

"But when we looked closer, we found something even more unusual: given how far away the gas was from the star, it was moving much faster than expected. This had us puzzled for quite some time," said Lovell, a doctoral student at the University of Cambridge.

To solve the mystery, researchers relied on a computer model simulation of NO Lup's debris ring.

"We found a simple way to explain it: by modeling a gas ring, but giving the gas an extra kick outward," said Grant Kennedy, who led modeling research for the new study.

"Other models have been used to explain young discs with similar mechanisms, but this disc is more like a debris disc where we haven't witnessed winds before. Our model showed the gas is entirely consistent with a scenario in which it's being launched out of the system at around 22 kilometers per second, which is much higher than any stable orbital speed," said Kennedy, a research fellow at the University of Warwick.

The simulations showed carbon monoxide could be produced by asteroid collisions or by sublimation -- the rapid transition from a solid to a gas -- on the surface of comets rich with carbon monoxide ice.

"This fascinating star is shedding light on what kind of physical processes are shaping planetary systems shortly after they are born, just after they have emerged from being enshrouded by their protoplanetary disk," said study co-author Mark Wyatt.

"While we have seen gas produced by planetesimals in older systems, the shear rate at which gas is being produced in this system and its outflowing nature are quite remarkable, and point to a phase of planetary system evolution that we are witnessing here for the first time," said Wyatt, a professor at Cambridge's Institute of Astronomy.

Researchers plan to use ALMA to conduct more detailed investigations of NO Lup in the new year, with hopes that high resolution observations can help explain how the stellar system's debris ring can generate such tremendous gas outflow speeds.