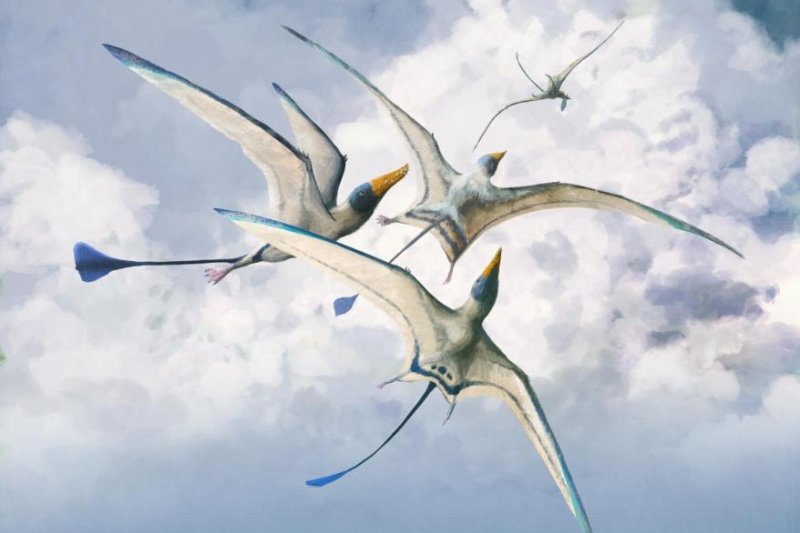 Most pterosaurs, flying reptiles that lived alongside the dinosaurs, doubled their flying efficiency over the course of their 150-million-year existence. Photo by Mark Witton/University of Reading

Oct. 28 (UPI) -- During their 150 million-year existence, pterodactyls and other winged reptiles known as pterosaurs steadily improved their flying abilities.

According to a paper published Wednesday in the journal Nature, pterosaurs doubled their flying efficiency over the course of their evolutionary history.

Unfortunately, their improved flying couldn't save them from the extinction event that wiped out the dinosaurs 66 million years ago.

RELATED Two bird-sized dinosaurs could glide, but time in the skies was short-lived

Instead, the winged reptiles made small physiological improvements over the course of their existence, slowly but steadily improving their flying prowess.

"Pterosaurs were a diverse group of winged lizards, with some the size of sparrows and others with the wingspan of a light aircraft," lead study author Chris Venditti said in a news release.

"Fans of the movie Jurassic World will have seen a dramatization of just how huge and lethal these creatures would have been. Their diet consisted mostly of other animals, from insects to smaller dinosaurs," said Venditti, an evolutionary biologist at the University of Reading in Britain.

Numerous studies have showcased the process of natural selection across small timescales, but identifying efficiency improvements across longer timescales has proven difficult.

"Our new method has allowed us to study long-term evolution in a completely new way, and answer this question at last by comparing the creatures at different stages of their evolutionary sequence over many millions of years," Venditti said.

Scientists analyzed the shifting skeletal structures and dimensions of 75 pterosaur species over 150 million years. Though most pterosaurs doubled their flying efficiency, researchers found one group invested their evolutionary capital in size.

RELATED New flying pterosaur species identified is among the largest ever

Azhdarchoids, researchers found, got bigger but not better at flying. Their size advantage allowed them to overcome their pedestrian flying abilities. One group member, Quetzlcoatlus, grew as long as a giraffe.

"This is unique evidence that although these animals were competent fliers, they probably spent much of their time on the ground," said study co-author Joanna Baker, evolutionary biologist at Reading. "Highly efficient flight probably didn't offer them much of an advantage, and our finding that they had smaller wings for their body size is in line with fossil evidence for their reduced reliance on flight."

Not all Jurassic species that took to the skies were able to achieve longevity.

Research published earlier this month revealed the evolutionary failures of a pair of gliding dinosaur species. Outcompeted by birds from below and pterosaurs from above, the gliding species Yi and Ambopteryx never had the chance to evolve improved flying abilities.