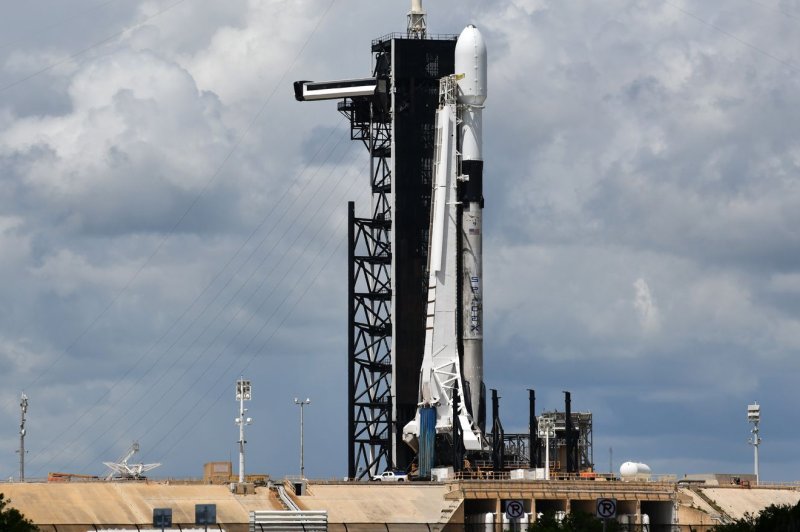 A SpaceX Falcon 9 rocket is prepared for launch from Kennedy Space Center in August with a payload of Starlink communications satellites aboard. File Photo by Joe Marino/UPI | License Photo

Oct. 22 (UPI) -- For the second day in a row, officials were forced to scrub SpaceX's Starlink-15 mission.

The aerospace company's Falcon 9 rocket was originally scheduled to carry 60 more Starlink broadband satellites into space on Wednesday, but poor weather pushed the launch to Thursday.

"Standing down from today's launch of Starlink to allow additional time for mission assurance work; will announce next launch opportunity once confirmed on the Range," SpaceX confirmed on Twitter.

SpaceX is expected to reschedule the Starlink-15 launch for midday Friday.

SpaceX fans and media members have taken to referring to October as "Scrubtober" online, as SpaceX has been continually frustrated by poor weather and launch delays.

If and when SpaceX's 15th Starlink mission is completed, the company will see its broadband constellation grow by 60 satellites. SpaceX has now put 180 Starlink satellites into orbit since the beginning of October.

SpaceX completed its 14th Starlink mission on Sunday. With this week's two launches, SpaceX now has well over 800 broadband satellites in space.

Earlier this month, SpaceX founder and CEO Elon Musk tweeted that Starlink's constellation had grown large enough to begin beta-testing the Internet service system in both the United States and southern Canada.

Science News // 6 hours ago
Researchers capture first clear view of bubble where stars are born
June 23 (UPI) -- Researchers at the University of Maryland have created the first high-resolution image of an expanding bubble of hot plasma and ionized gas in which stars are born, publishing it Wednesday in the Astrophysical Journal.

Science News // 8 hours ago
Year's final supermoon rises Thursday
Summer is officially underway in the Northern Hemisphere, and the new season will kick off with a full moon unlike any other until next June.

Science News // 8 hours ago
Leaded gas banned decades ago, particles in air still threat to health
Decades-old lead particles still pollute London's air, a stubborn and potentially hazardous leftover of a now banned product. But a new study suggests the leftovers are a threat to health even at their current levels.