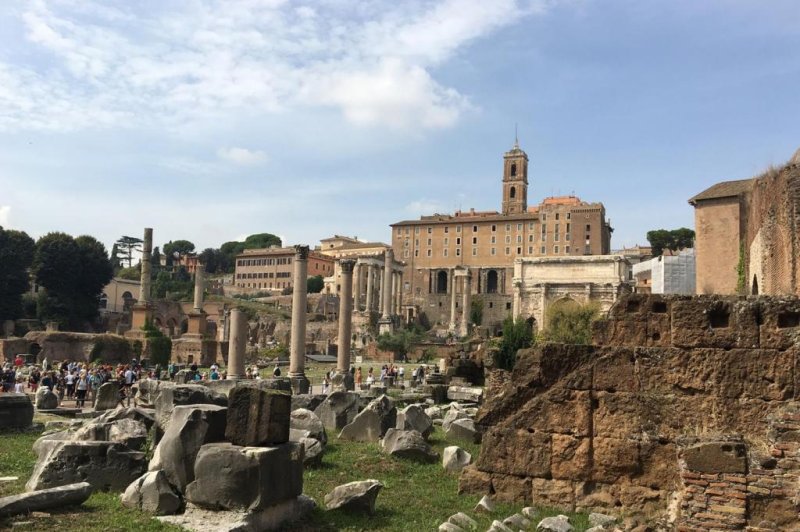 When leaders abandon the social contract and betray their society's ideals, new research suggests formerly successful societies, such as the Roman Empire, can collapse in dramatic fashion. Photo by Linda Nicholas, Field Museum

According to a new study published in the journal Frontiers in Political Science, ancient autocracies were less likely to last, but suffered less dramatic failures.

To better understand the role of government on the success and longevity of ancient societies, researchers took an in-depth look at principles that guided the governments of four societies: the Roman Empire, China's Ming Dynasty, India's Mughal Empire and the Venetian Republic.

Because free and fair elections were rare or nonexistent during ancient times, researchers had to come up with an alternative for gauging good governance.

"You can't really measure it by the role of elections, so important in contemporary democracies," study co-author Gary Feinman, the MacArthur curator of anthropology at Chicago's Field Museum, said in a news release. "You have to come up with some other yardsticks, and the core features of the good governance concept serve as a suitable measure of that."

"They didn't have elections, but they had other checks and balances on the concentration of personal power and wealth by a few individuals," Feinman said. "They all had means to enhance social well-being, provision goods and services beyond just a narrow few, and means for commoners to express their voices."

For the ruling elite, good governance was a sensible choice. Most successful empires depended on taxes and resources from local economies, and thus their leaders had to meet the basic needs of their citizens.

RELATED Earthquake may have destroyed Canaanite palace 3,700 years ago

"There are often checks on both the power and the economic selfishness of leaders, so they can't hoard all the wealth," Feinman said.

However, researchers found that when good governments turned rotten, the breakup was often uglier than the collapse of autocratic governments.

According to the study, good governments fail more dramatically because the bureaucracy is more intimately integrated with society at large.

"Social networks and institutions become highly connected, economically, socially, and politically," Feinman said. "Whereas if an autocratic regime collapses, you might see a different leader or you might see a different capital, but it doesn't permeate all the way down into people's lives, as such rulers generally monopolize resources and fund their regimes in ways less dependent on local production or broad-based taxation."

Researchers also looked at why exactly good governments fail. They found the collapse of good governments was often triggered by the rise to power of amoral leaders -- leaders who ignored the social contract and abandoned their society's ideals.

Such betrayals often precipitated or accompanied rising inequality, concentration of political power, tax evasion, crumbling infrastructure and the decline of bureaucratic institutions -- a pattern researchers suggest can be observed in modern societies.

"What I see around me feels like what I've observed in studying the deep histories of other world regions, and now I'm living it in my own life," said Feinman. "It's sort of like Groundhog Day for archaeologists and historians."

Researchers suggest their findings are a reminder that even previously successful governments and prosperous, stable societies can fail when leaders abandon a society's core principles.

"In the cases we address, calamity could very likely have been avoided, yet, citizens and state-builders too willingly assumed that their leadership will feel an obligation to do as expected for the benefit of society," said lead study author Richard Blanton.

"Given the failure to anticipate, the kinds of institutional guardrails required to minimize the consequences of moral failure were inadequate," said Blanton, a professor emeritus of anthropology at Purdue University.