Scientists regrew mold from a frozen sample of the strain that helped Alexander Fleming first discover penicillin. Photo by CABI

Sept. 24 (UPI) -- In 1928, scientist Alexander Fleming discovered the first antibiotic, penicillin. The antibiotic was produced by a mold that had started growing in a Petri dish in Fleming's lab.

Now, nearly a century later, scientists have successfully sequenced the genome of the original mold, a member of the genus Penicillium, and compared it those of later penicillin-producing molds.

The analysis, published Thursday in the journal Scientific Reports, showed the mold strains used to produce penicillin industrially in the United States and Europe synthesize the antibiotic in slightly different ways.

"We originally set out to use Alexander Fleming's fungus for some different experiments, but we realized, to our surprise, that no-one had sequenced the genome of this original Penicillium, despite its historical significance to the field," lead researcher Timothy Barraclough, an evolutionary biologist and professor at both Oxford University and Imperial College London, said in a news release.

To sequence the genome of Fleming's Penicillium mold, researchers allowed a frozen sample from the original mold to regenerate before extracting DNA.

RELATED Each human gut hosts a unique community of viruses

Molds evolved penicillin production in response to the threat of invading microbes. Scientists suspect differences in the microbial threats in the United States and Europe caused the industrial mold strains -- and the wild Penicillium molds from which they're derived -- to evolve slightly different antibiotic production enzymes.

"But it is possible that industrial methods might have missed some solutions for optimizing penicillin design, and we can learn from natural responses to the evolution of antibiotic resistance," Pathak said.

Science News // 8 hours ago
Massive flying pterosaurs had spoked vertebrae to support especially long necks
April 14 (UPI) -- Azhdarchid pterosaurs and their hollow bones -- necessary for flying -- were only able to support such heavy necks and heads thanks to a unique structure hidden inside their vertebrae.

Science News // 12 hours ago
Human screams can convey at least six different emotions
April 14 (UPI) -- Scientists have underestimated the communicative abilities of the human scream, according to a new study. 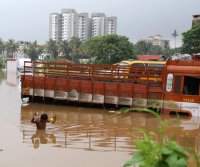