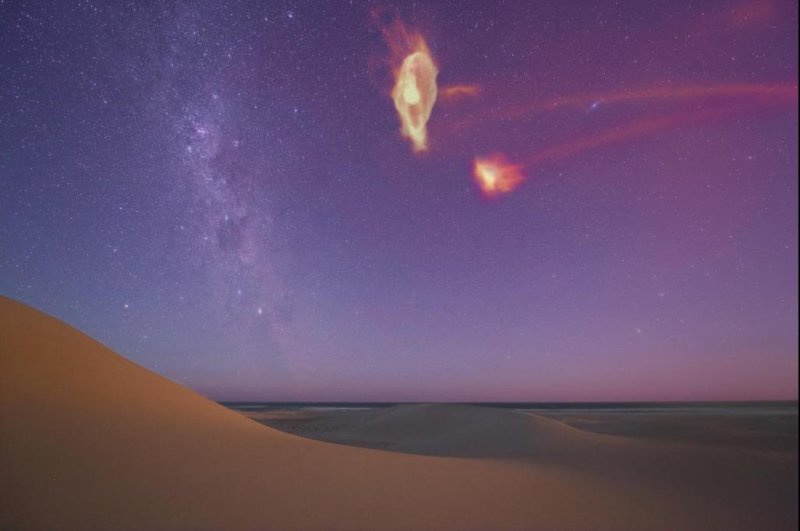 The Magellanic Corona covers the entire sky while the Magellanic Stream is seen as gas flowing away from the two dwarf galaxies, the Large and the Small Magellanic Clouds, in an image taken from new simulations on the system's formation. Image by Colin Legg/Scott Lucchini

Until now, scientists weren't sure how the stream came to be so massive, but new models suggest a halo of warm gas surrounding the Magellanic Clouds fueled the growth of the Magellanic Stream.

Scientists detailed the predictions of the new models in a new paper, published Wednesday in the journal Nature.

"[Our] theory predicts that a high-mass Large Magellanic Cloud should be surrounded by a warm halo, and we believe that its existence will be confirmed from next observations at the Hubble Space Telescope," study co-author Elena D'Onghia, professor of astronomy at University of Wisconsin, told UPI.

Previous models showed a combination of gravitational tides and forces exerted by the dwarf galaxies surrounding the Milky Way helped to pull the Magellanic Stream out of the Magellanic Clouds. These models did a good job of explaining the stream's shape and size, researchers say.

Though the new research is primarily based on computer simulations, researchers suggest they were motivated by a several recent astronomical observations hinting at the presence of large amounts of highly ionized gas at coronal temperatures surrounding the Magellanic Clouds.

"The corona has a large impact on the formation and evolution of the stream, for several reasons," D'Onghia said.

"First, the corona surrounding the Clouds heats the cool gas pulled out of the Small Magellanic Cloud several billion years ago, before the clouds fall into the Milky Way, thus feeding the nascent stream," she said. "Second, it protects the stream from disruption by the Milky Way's own hot corona, acting as a protective cocoon. Finally, the corona provides most of the mass of the stream."

By more accurately modeling the formation and evolution of the Magellanic Stream, astronomers can improve their understanding of how the Milky Way accretes gas from its population of satellite galaxies.

In future studies, scientists plan to test their theory and models using direct Hubble Space Telescope observations of the Magellanic Stream and the Leading Arm of the Stream.

"This gas structure is very complex," D'Onghia said. "Its morphology, metal content and spatial location is still controversial and poses challenges to the tidal origin of the Magellanic Stream."

Science News // 3 hours ago
Mars, meteors: December's must-see astronomy events
December features the longest nights of the year, and the final month of 2022 will be packed with astronomical happenings ranging from the most active annual meteor shower to the best views of Mars since 2020.

Science News // 1 day ago
NASA awards contract for 3D-printed construction on moon, Mars
Nov. 29 (UPI) -- Texas-based startup ICON has landed a five-year, $57 million contract from NASA to 3D-print landing pads, roads and shelter on the moon and on Mars.