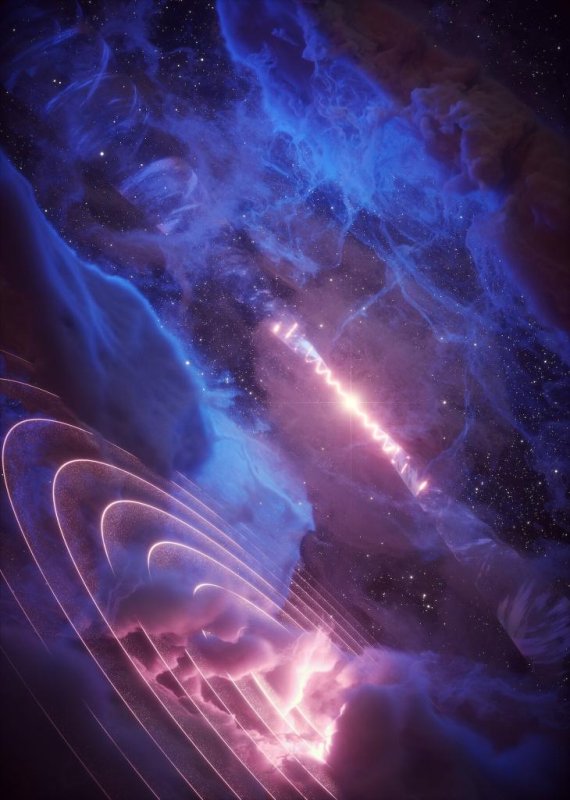 The microquasar SS 433 -- seen in the background -- sways with a period of 162 days, while the gas cloud Fermi J1913+0515 -- in the foreground -- about 100 light years away pulsates with the same rhythm in gamma rays, suggesting a direct connection. Photo by DESY/Science Communication Lab

Aug. 17 (UPI) -- Astronomers have discovered an otherwise unremarkable cosmic gas cloud in the constellation Aquila with a gamma-ray heartbeat that pulses to the rhythm of a neighboring blackhole.

The strange phenomena, published Monday in the journal Nature Astronomy, suggests the gas cloud and black hole are somehow linked, despite being separated by 100 light-years.

Researchers suspect the gas cloud's gamma-ray heartbeat is powered by the consumption patterns of the black hole, which regularly feeds on a giant star with a mass 30 times greater than the mass of our sun.

The black hole siphons stellar material from the giant star as they orbit each other. The two bodies, located 15,000 light-years in the Milky Way, circle each other every 13 days.

"This material accumulates in an accretion disc before falling into the black hole, like water in the whirl above the drain of a bath tub," study author Jian Li said in a news release.

"However, a part of that matter does not fall down the drain but shoots out at high speed in two narrow jets in opposite directions above and below the rotating accretion disk," said Li, a research fellow at the German research institute DESY.

To better understand the dynamics of the so-called micro quasar, called SS 433, researchers analyzed a decade's worth of observations by NASA's Fermi gamma-ray space telescope. The powerful jet emanating from the black hole's accretion disk produces both X-rays and gamma rays.

"The accretion disc does not lie exactly in the plane of the orbit of the two objects. It precesses, or sways, like a spinning top that has been set up slanted on a table," said co-author Diego Torres.

"As a consequence, the two jets spiral into the surrounding space, rather than just forming a straight line," said Torres, a professor at the Catalan Institution for Research and Advanced Studies.

When analyzing the the Fermi data, researchers determined that the precession of the swirling jets complete a cycle once every 162 days. Researchers also recorded a surprisingly strong matching gamma-ray signal from a source far from the origins of the micro quasar's jets.

The sequencing of the gamma-ray signal, emanating from an inconspicuous cosmic gas cloud, suggests it is powered by the micro quasar.

"Finding such an unambiguous connection via timing, about 100 light-years away from the micro quasar, not even along the direction of the jets is as unexpected as amazing," says Li. "But how the black hole can power the gas cloud's heartbeat is unclear to us."

Researchers suspect the connection between the micro quasar and gas cloud is forged by fast-moving fast protons, originating from the nuclei of hydrogen atoms formed at the end of the swirling jets.

When these proton outflows collide with the gas cloud, the gas particle vibrate intensely, producing gamma rays, they said.

"Energetically, the outflow from the disc could be as powerful as that of the jets and is believed to precess in solidarity with the rest of the system," said Torres.

Scientists said that additional high-resolution images of the phenomena will help them work out their theories and models for how the micro quasar influences the heartbeat of a distant gas cloud.