Acoustic wave technology powers many large touch screens, like those found on ATM machines and airport kiosks. Pictured, a woman takes out money at a Bank of America ATM in Washington, DC. Photo by Billie Jean Shaw/UPI

July 17 (UPI) -- Engineers have developed a way to more efficiently propagate sound waves along the boundaries of topological materials.

The breakthrough, described Friday in the journal Science Advances, could pave the way for cheaper, lighter and more energy efficient technologies, including ultrasound imaging, sonar and electronic systems sonic devices.

Topological materials and metamaterials are materials that feature properties unaffected by continuous deformation -- patterns, shapes and structures that can be stretched but not broken.

In a topological insulator, for example, an electric current flows along the object's boundaries, uninterrupted by the object's imperfections. Studies have shown metamaterials can be designed to propagate sound and light, just like electrons.

But while tests have shown sound waves can follow topological order, they don't always move in the same direction. Sounds waves can turn corners and travel smoothly along the edges of topological materials, but some waves get bounced in the reverse direction by imperfections.

For the newest experiment, scientists relied on time-reversal symmetry breaking, instead of geometrical asymmetries, to produce topological order with sound waves.

The new technique allowed scientists to propagate sound waves that were entirely unidirectional, unaffected by disorder and imperfections.

"The result is a breakthrough for topological physics, as we have been able to show topological order emerging from time variations, which is different, and more advantageous, than the large body of work on topological acoustics based on geometrical asymmetries," lead study author Andrea Alù, said in a news release.

"Previous approaches inherently required the presence of a backward channel through which sound could be reflected, which inherently limited their topological protection," said Alù, founding director of Photonics Initiative at the Advanced Science Research Center at The Graduate Center, CUNY.

Science News // 1 hour ago
Hippos can recognize familiar voices, new study finds
Jan. 24 (UPI) -- Hippopotamuses can tell the difference between strangers and their neighbors based only on the sound of their voices, according to a study published Monday in Current Biology. 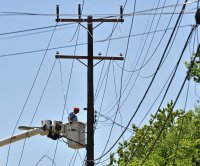