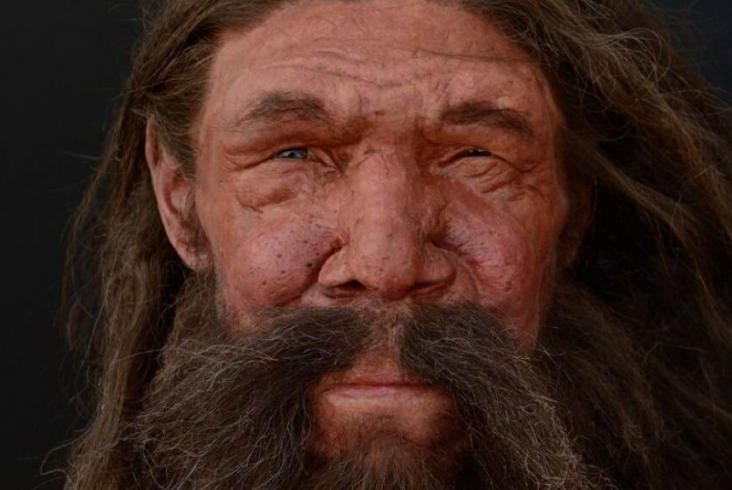 New research suggests the hybrid offspring of Neanderthals and anatomically modern humans would have been healthy and fertile. Photo by Kennis and Kennis Reconstructions

In a new study, published Wednesday in the journal Proceedings of the Royal Society B, scientists quantified the genetic differences between early humans and their closest relatives, Neanderthals and Denisovans.

The analysis showed the genetic distance values separating the three human species were smaller than the differences between modern animal species -- like brown bears and polar bears -- known to produce healthy hybrid offspring.

"Our desire to categorize the world into discrete boxes has led us to think of species as completely separate units," Greger Larson, director of the Palaeogenomics and Bio-Archaeology Research Network at the University of Cambridge, said in a news release. "Biology does not care about these rigid definitions, and lots of species, even those that are far apart evolutionarily, swap genes all the time."

"Our predictive metric allows for a quick and easy determination of how likely it is for any two species to produce fertile hybrid offspring," Larson said. "This comparative measure suggests that humans and Neanderthals and Denisovans were able to produce live fertile young with ease."

For the study, researchers looked at relationships between the fertility of modern animal hybrids and the genetic differences between the two hybridizing species. The analysis showed that species that were genetically more similar were more likely to produce fertile offspring.

The researchers also determined that there was a threshold for the fertility of hybrid offspring. When scientists used the results of their analysis to measure the relative genetic differences between Neanderthals, Denisovans and anatomically modern humans, they found the three human species more than surpassed the threshold.

Authors of the new study suggest their methodology can be used to determine the likelihood that any two species would produce healthy, fertile offspring. Such information could help zookeepers decide which animals to house together.

"Many decisions in conservation biology have been made on the basis that related organisms that produce hybrids in captivity should be prevented from doing so," said Richard Benjamin Allen, co-first author of the study.

"Such an approach has not considered the significant role that hybridization has played in evolution in the wild, especially in populations under the threat of extinction," Allen said. "Our study can be used to inform future conservation efforts of related species where hybridization or surrogacy programs could be viable alternatives."

Science News // 4 days ago
Long-duration space flight equal to decade of bone loss in astronauts, study says
July 1 (UPI) -- Scientists have long known that astronauts lose bone density while in space, but a study published this week found they only partially recover this loss one year after returning to Earth.

Science News // 1 week ago
Miner unearths nearly complete mummified baby woolly mammoth in Canada
A young miner called for backup when his front-end loader unexpectedly struck something in the Canadian permafrost last week on the first day of summer in the Northern Hemisphere.
Advertisement