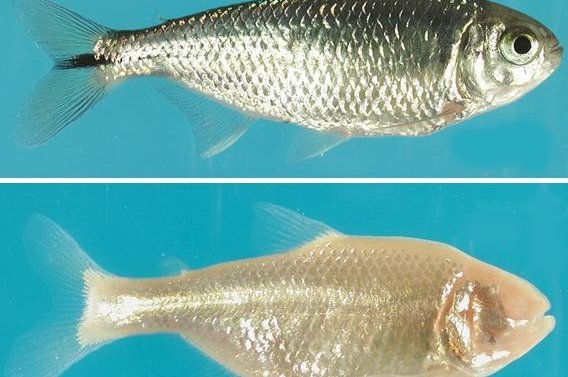 The Mexican tetra comes in two forms, varieties that can see and those that are blind. Photo by University of Maryland

June 2 (UPI) -- Surface-dwelling varieties of the Mexican tetra, or Mexican cave fish, have eyes to see, but many varieties, living in caves where light cannot penetrate, do without eyesight.

Blind and seeing Mexican tetra varieties belong to the same species, Astyanax mexicanus. They are separated only by a few genetic mutations -- mutations that, until now, have remained a mystery.

Through careful genetic analysis, scientists isolated the genetic change, a mutation to the gene cystathionine beta-synthase a, or cbsa. The mutation cuts off blood flow to the eyes of the blind cave fish during embryonic development.

Scientists detailed their discovery in a new paper, published Tuesday in the journal Nature Communications.

"We know that genes controlling eye degeneration are scattered all over the Mexican cave fish genome," study co-author William Jeffery, a professor of biology at the University of Maryland, said in a news release. "There may be 10 to 20 different genes involved, and this is the first time we've been able to pin down one specific gene and show the mechanism at work."

Researchers began by selecting a handful of genome regions that might host the mutations responsible for eye degeneration. Scientists observed changes in these regions during the period of embryonic development when cave fish lose their eyesight.

The research showed mutations to the cbsa gene were present during the embryonic development of all blind Mexican cave fish, but absent among Mexican tetras with eyesight.

When scientists used the gene editing tool CRISPR-Cas9 to augment the cbsa gene in the embryos of seeing Mexican tetras, the fish developed poor and nonexistent eyesight.

The mutation works by harming the vascular system around the eyes, robbing the eyes of sufficient blood flow during embryonic development. Researchers suspect the cbsa gene mutation is just one of a handful of genetic changes that render Mexican cave fish blind.

"This is only one of multiple genes responsible for eye degeneration," said lead study author Li Ma, a principal faculty specialist in biology at the University of Maryland. "But now that we have successfully found the first, we know we can replicate this procedure to look for the others."

In humans, mutations to the cbsa gene are responsible for a condition called homocystinuria. In addition to poor vision, the disease can cause hemorrhaging, stroke, heart attacks and premature death.

"Mexican cavefish are not only surviving with homocystinuria, they're thriving," Jeffery said. "One thing we might be able to understand is how these fish recover from hemorrhages in the eye, which could provide insight into treatments for the disease in humans."