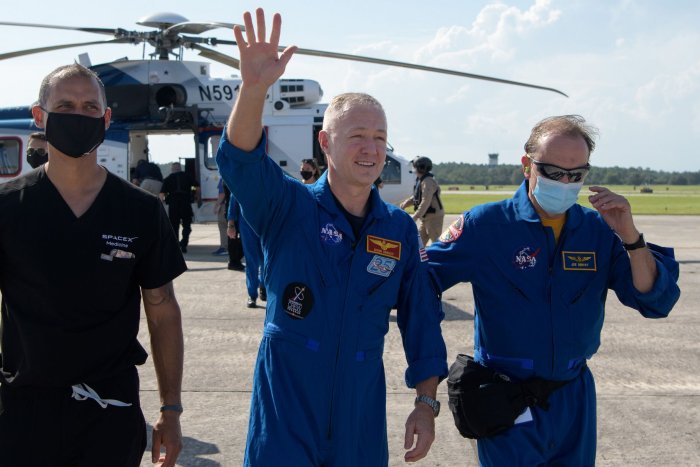 NASA astronaut Douglas Hurley (C) waves to onlookers as he boards a plane at Naval Air Station Pensacola to return him and NASA astronaut Robert Behnken home to Houston a few hours after the duo landed in their SpaceX Crew Dragon Endeavour spacecraft off the coast of Pensacola, Fla,, on August 2, 2020. Photo by Bill Ingalls/NASA | License Photo

The capsule connected to the station at 10:16 a.m. EDT, slightly ahead of the scheduled time as the space station passed above the northern China-Mongolia border. Astronauts Doug Hurley and Bob Behnken entered the station at 1:22 p.m.

NASA and SpaceX crews on the ground congratulated the astronauts, while astronaut Chris Cassidy -- already on board the station -- welcomed them.

"Bob and Doug, we here at SpaceX are honored to have been part of the ushering in of this new era of human spaceflight," SpaceX engineer Anna Menon said.

Behnken, in turn, congratulated the teams at SpaceX and NASA.

"Their incredible efforts over the last several years to make this possible cannot be overstated," he said of the SpaceX employees.

Just before docking, practiced flying the capsule manually. He congratulated SpaceX's teams for successfully training him and building the capsule.

"I only had to twist Doug's arm for two or three times to get him to allow me to deactivate the piloting controls," Behnken said.

The mission lifted off from NASA's Kennedy Space Center in Florida on Saturday afternoon -- the first crewed launch from U.S. soil in nine years.

The successful 19-hour journey to the space station makes SpaceX the first private company to send astronauts into orbit. It also was the first time since the final space shuttle mission that NASA didn't have to rely on Russia to get people into space.

After the launch on Saturday, Musk said he considers the launch a boost for SpaceX's ultimate goal of traveling to Mars. The company has been testing prototypes of its next-generation rocket and habitat, Starship, in Texas.

"This is hopefully the first step on a journey toward a civilization on Mars, of life becoming multi-planetary," Musk said. "That's seeming increasingly real after what happened today, getting people to orbit, finally after 18 years."

The astronauts slept for about eight hours before the approach to the space station.

No issues with the spacecraft have been reported -- described by a SpaceX commentator as "pretty boring for the astronauts, but that's what we wanted.

SpaceX secured a contract to provide ferry service to the space station for a fixed cost in 2014, and developed the rocket and capsule with NASA's cooperation.

The Falcon 9 rocket had already been proven as a reliable workhorse for carrying supplies to the space station 250 miles above Earth in 20 flights.

The space station travels at more than 17,000 mph, so the capsule performed several orbits to match its speed and altitude. The capsule docked autonomously.

Behnken and Hurley don't know how long they will be on the space station.

NASA has said it could be as little as six weeks and as much as 16 weeks, depending on how quickly the crew completes necessary maintenance on the space station and how favorable weather conditions are for spacecraft splashdown.

Behnken is scheduled to make several spacewalks with Cassidy, as Hurley monitors and controls instruments inside the station.

If the mission ultimately is successful, NASA plans to launch another SpaceX capsule to the space station Aug. 30, Bridenstine said.

Crew members for that mission are to be NASA astronauts Mike Hopkins, Victor Glover and Shannon Walker, along with Soichi Noguchi, an astronaut with the Japan Aerospace Exploration Agency.

Over the past decade, NASA astronauts only used Russian Soyuz rockets and capsules to reach the space station, at a cost of more than $70 million per seat.

Behnken, 49, and Hurley, 53, have been astronauts since their selection in 2000. They worked closely with SpaceX to develop the new spacecraft systems.

The return to Earth for the Demo 2 mission would mark the first splashdown of a U.S. space capsule carrying astronauts since the Apollo-Soyuz Test Project in 1975.

Science News // 3 days ago
NASA releases images of DART collision with asteroid
Sept. 29 (UPI) -- NASA released pictures on Thursday of the collision between its Double Asteroid Redirection Test and an asteroid seven million miles away.

Science News // 4 days ago
New report finds 2022 'disastrous year' for melting Swiss glaciers
Sept. 28 (UPI) -- Glaciers in Switzerland melted at record rates in 2022, according to a report released Wednesday by the Swiss Glacier Monitoring Network, which labeled it a "disastrous year."

Science News // 4 days ago
Astronomers find new evidence of massive ancient stars
Sept. 28 (UPI) -- Astronomers have discovered what could be chemical evidence of the earliest stars in the universe with help from the Gemini North Telescope in Hawaii.

Science News // 4 days ago
Scientists say fossils showing ancient fins forerunners of arms, legs
Sept. 28 (UPI) -- Ancient fossils of a jawless freshwater fish appear to make a connection of the first sign of paired fins and the forerunner of arms and legs, researchers from China and Britain said in a new paper released Wednesday.
Advertisement