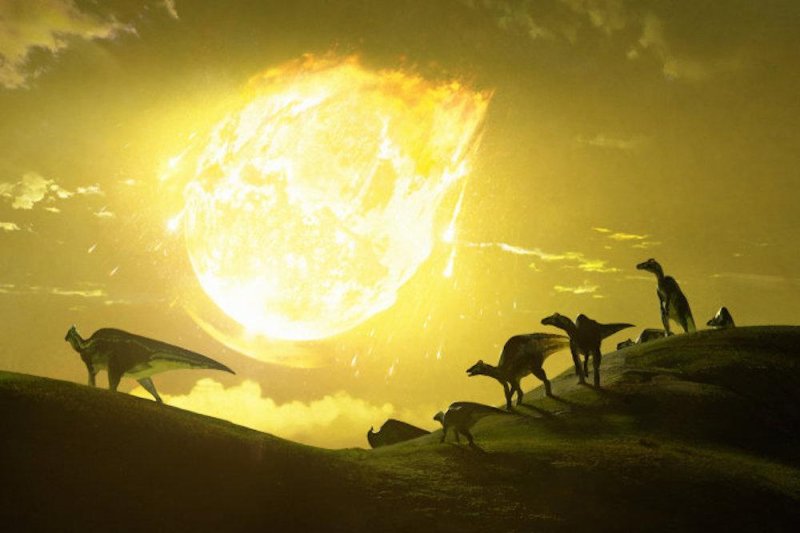 The asteroid that killed the dinosaurs struck at the deadliest possible angle, releasing billions of tons of climate-altering gases into the atmosphere. Photo by Chase Stone/ICL

May 27 (UPI) -- Had the asteroid that smashed into the Yucatan Peninsula, 67 million years ago, struck at a slightly more innocent angle, modern humans might be living alongside dinosaurs.

Alas, such a world was not to be. According to a new study, the asteroid that snuffed out the dinosaurs struck Earth at the worst possible -- the deadliest and most destructive -- angle.

For the model, scientists tested a variety of asteroid sizes, speeds and angles of impact to find the scenario that best explained the shape and composition of Mexico's Chicxulub crater. The simulations showed the Chicxulub asteroid hit the Yucatan Peninsula at a 60 degree angle.

The space rock's trajectory ensured the maximum amount of climate-altering gas -- billions of tons of sulfur -- was released into Earth's atmosphere, blocking out the sun and triggering nuclear winter.

RELATED Unlike 'Jurassic Park,' real raptors may not have hunted in packs

The impact and the sudden climate change that followed killed 75 percent of all life on Earth, including the entire dinosaur family.

Scientists detailed the results of their simulations in a new paper published this week in the journal Nature Communications.

"For the dinosaurs, the worst-case scenario is exactly what happened," lead study author Gareth Collins, professor planetary science at Imperial College London, said in a news release. "The asteroid strike unleashed an incredible amount of climate-changing gases into the atmosphere, triggering a chain of events that led to the extinction of the dinosaurs. This was likely worsened by the fact that it struck at one of the deadliest possible angles."

For decades, scientists have argued about what exactly killed off the dinosaurs. While some charge that an asteroid impact alone explains the disappearance of the dinosaurs, others argue a period of increased vulcanism in Asia also played a role. A study published early this year showed India's Deccan Traps began erupting long before the dinosaurs died off.

The latest research supports the theory that the Chicxulub asteroid was deadly enough on its own to account for the mass extinction event that killed the dinosaurs.

"Our simulations provide compelling evidence that the asteroid struck at a steep angle, perhaps 60 degrees above the horizon, and approached its target from the north-east," Collins said. "We know that this was among the worst-case scenarios for the lethality on impact, because it put more hazardous debris into the upper atmosphere and scattered it everywhere -- the very thing that led to a nuclear winter."

RELATED Predator-packed Sahara was most dangerous place on Earth 100M years ago
RELATED Once dinosaurs were gone, some birds evolved big brains

Science News // 4 days ago
Winged microchip is the world's smallest human-made flying structure
Sept. 22 (UPI) -- Engineers at Northwestern University have shrunk a microchip to roughly the size of a grain of sand and given it the power of flight.
Advertisement