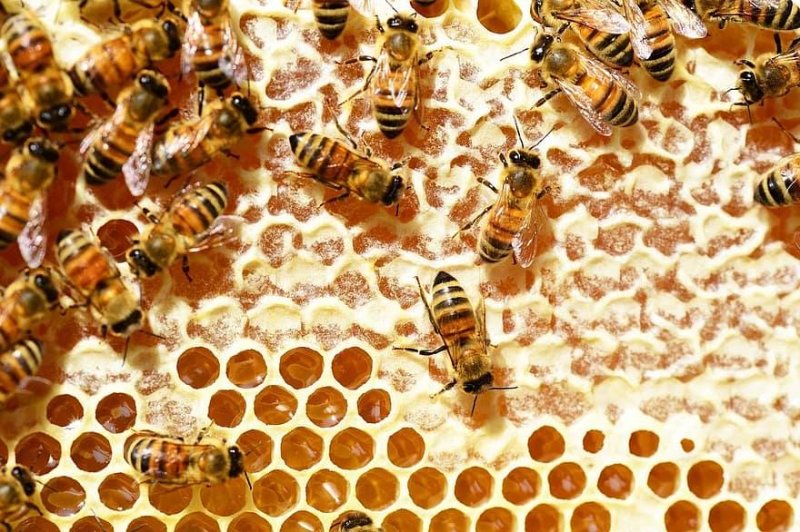 Insecticides alter the behavior of nursing bees and delay the development of bee larva, according to new research. Photo by Pikist/CC

May 26 (UPI) -- Using a new video technique, scientists have documented the ill effects of pesticides on the nursing behavior and larval development of honeybees.

When exposed to neonicotinoids, one of the most common classes of insecticides, nurse bees fed larva less often and larval development took 10 hours longer. When larval development is delayed, hives are more susceptible to infestations of Varroa mites and other parasites.

Inside a honeybee hive, each new reproductive cycle begins with a deep clean. Cleaning bees rid empty combs of the remains of the previous brood. Once clean, the queen lays fresh eggs inside the brood cells. After the eggs hatch, nursing bees feed the larva for six days before capping the brood cell with wax.

Inside the capped combs, the larvae spin cocoons and undergo metamorphosis, emerging a few weeks latter with the features of a honeybee -- head, wings, legs. Just three weeks after the queen lays an egg, a fully grown bee emerges.

To observe this process in real time, researchers built a honeybee hive with a plane of glass. Special cameras allowed researchers to simultaneously watch the brood cells of four different colonies. Red light cameras ensured the bees weren't disrupted by the technology's presence.

Scientists detailed the results of their experimental observations in a new paper published Tuesday in the journal Scientific Reports.

"Neonicotinoids affect the bees' nervous systems by blocking the receptors for the neurotransmitter acetylcholine," lead study author Paul Siefert, scientist with Goethe University Frankfurt at the Bee Research Institute of the Polytechnical Society, said in a news release. "For the first time, we were able to demonstrate that neonicotinoids also change the social behavior of bees. This could point to the disruptions in nursing behavior due to neonicotinoids described by other scientists."

Because Varroa mites lay eggs inside brood cells before they're capped, they benefit from prolonged development. The longer the bee larva take to emerge, the longer the mites can develop and multiply.

Researchers aren't yet certain whether the delayed development is caused by behavior changes in the nurse bees or from the presence of insecticides in the sugar syrup or jelly.

"From other studies in our work group, we know that the concentration of acetylcholine in the jelly is reduced by neonicotinoids," said Siefert. "On the other hand, we have observed that with higher dosages, the early embryonal development in the egg is also extended -- during a period in which feeding does not yet occur."

Follow-up studies are needed to determine precisely the ways insecticides impede the development of bee larva. Scientists hope other bee researchers will adopt the new observation and analysis methods.

"Our innovative technology makes it possible to gain fundamental scientific insights into social interactions in bee colonies, the biology of parasites, and the safety of pesticides," Siefert said.