Rocket Crafters, a startup rocket development company in Florida, completed a new round of tests on its hybrid rocket engine. Photo courtesy of John Kraus/Rocket Crafters

ORLANDO, Fla., May 13 (UPI) -- A Florida rocket development company, Rocket Crafters, said Wednesday it concluded a new round of test-firings of its hybrid rocket engine, and plans a test flight with a small rocket in New Mexico later this year.

"We're excited about the data we've seen and to fly a rocket soon," said Rob Fabian, the company president. "The engine performance for the tests were on track with models."

The tests were conducted over the last few months at the company's facility in Cocoa, Fla., about 20 miles south of Kennedy Space Center. The company test-fired the largest experimental version of the engine yet, which it calls the Comet and emits 5,000 pounds of thrust.

By comparison, small launch company Rocket Lab provides satellite launches with an Electron rocket that has 34,000 pounds of thrust.

Two tests were flawless, Fabian said, while a third saw a small explosion, but the company determined the problem was with an ancillary part of the test engine and not in the core design.

Several space companies are using 3D printers for parts, but Rocket Crafters believes it is the first to 3D-print its patented plastic fuel core. The plastic is stable until it mixes with liquid propellant to power the company's STAR-3D engine.

Rocket Crafters plans to test-launch a sounding rocket, or small rocket, to about 60,000 feet from New Mexico's Spaceport America, Fabian said. Due to the COVID-19 pandemic, a date hasn't been set. 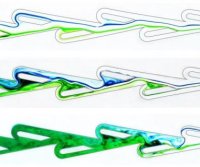