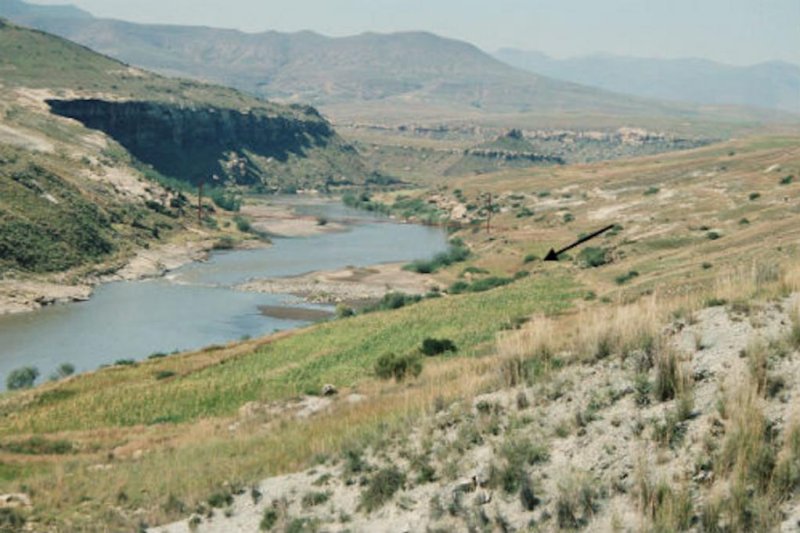 Archaeologists found dairy residues on pot fragments left behind by groups of hunter gatherers that occupied Lesotho's highlands during the first millennium AD. The oldest pots were found near Likoaeng, a dig site along the Senqu River. Photo by Peter J. Mitchell

May 11 (UPI) -- New chemical analysis of ancient pots has confirmed that groups of hunter-gathers in the highlands of present-day Lesotho, a landlocked nation in southern Africa, were consuming the dairy of domestic animals. as early as the first millennium AD.

Previous archaeological surveys have revealed the presence of domestic animal bones at hunter-gatherer sites in Lesotho's Maloti-Drakensberg Mountains. The findings have suggested these early groups supplemented their hunting and foraging with the dairy of sheep and other livestock acquired through contact with agricultural groups.

Subsequent DNA studies, however, found many of the supposedly domestic animal bones found in the Lesotho highlands belonged to wild species, casting doubt on the presence of livestock in the region.

"We used organic residue analysis to investigate fats that become absorbed into the porous clay matrix of a pot during its use," anthropologist and lead study author Helen Fewlass said in a news release. "We extracted and analyzed lipid residues from pots from two hunter-gatherer sites with domestic livestock remains in the highlands of Lesotho, Likoaeng and Sehonghong, dating to the mid-late first millennium AD and compared them to lipids extracted from pots from a recent nearby agricultural settlement, Mokatlapoli."

Fewlass, now working at the Max Planck Institute for Evolutionary Anthropology in Germany, conducted the newly published research while working on her masters thesis at the University of Bristol in Britain.

Scientists were also able to measure the stable carbon isotopic values of fatty acids in the ancient diary residues. The values were distinct from those measured at the archaeological sites of more recent agricultural groups, suggesting these early hunter gatherers were practicing unique methods of animal husbandry.

"The presence of dairy fats in pots from Likoaeng and Sehonghong in highland Lesotho shows that hunter-gatherers in the mountains had adopted at least sporadic use of livestock from agricultural groups in South Africa not long after their arrival in the 1st millennium AD," Fewlass said.