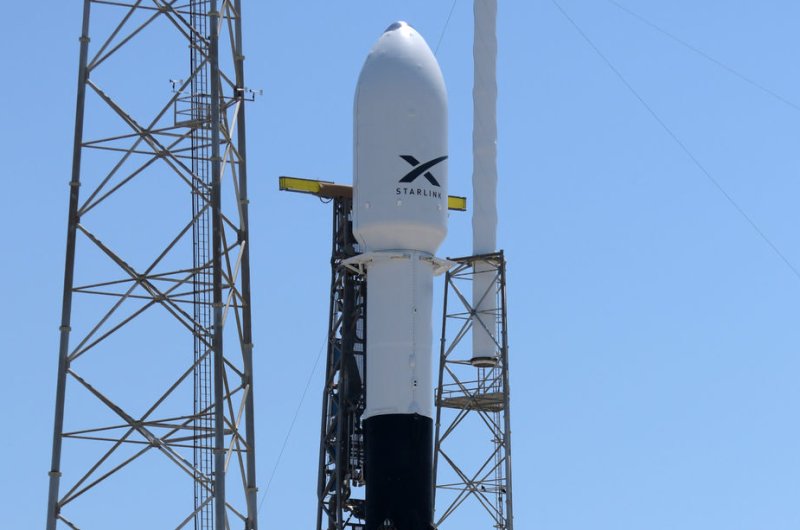 A SpaceX Falcon 9 rocket like this one is scheduled for launch Wednesday with Starlink satellites aboard. File Photo by Joe Marino-Bill Cantrell/UPI | License Photo

The Falcon 9 rocket is prepared for lift off from Launch Complex 39A at Kennedy Space Center. The planned launch has an hourlong period for same-day delays, according to the U.S. Space Force weather forecast window.

The weather is expected to be 90 percent favorable for a launch, according to a Space Force forecast. Thursday is a backup day in case of problems.

The launch will add 60 more Starlink satellites to SpaceX's constellation, boosting the number to 422 -- by far the largest known satellite network.

Elon Musk's space firm previously launched 60 Starlink satellites at a time in May, November, Jan. 6 and 29, Feb. 17 and March 18, with two test satellites launched before that.

The coronavirus pandemic prompted NASA and the Space Force to bar most public or media from viewing recent launches. Personnel are required to work from home, if possible, but in-person launch operations are considered essential for missions.

NASA and Space Force officials have said they are taking all precautions, including rotating of launch crews, restricting interaction between those crews and sitting farther apart.

The planned satellite launch comes as SpaceX is preparing for a launch in late May of the first crewed flight of NASA astronauts from U.S. soil since 2011.

Astronauts Bob Behnken and Doug Hurley are scheduled to ride in a SpaceX Crew Dragon capsule to the International Space Station.

The booster for SpaceX's launch Wednesday has been used three times, including the first full uncrewed test flight of the Crew Dragon capsule to the space station in March 2019. SpaceX said it completed a test-firing of the mission's Falcon 9 rocket Friday.

For Wednesday's launch, one of the fairings, or rocket nose cone halves, was used previously to launch a commercial satellite in August, SpaceX said.

During its last Starlink launch, SpaceX announced via live broadcast the results of an experiment: that a nonreflective coating on a single Starlink satellite in orbit makes it notably less visible from the ground.

Astronomers have complained that the Starlink satellites make it far more difficult to conduct observations from ground-based telescopes.

SpaceX now says it plans to try a new experiment: installing a sunshade on a satellite in an upcoming launch. The company did not immediately respond to requests for more information about that experiment.

Starlink satellites are roughly the size of a large dinner table, with each weighing more than 500 pounds.

SpaceX intends to launch thousands of satellites to beam broadband around the globe, providing high-speed Internet everywhere, even in extreme weather or aboard super-fast jets.