For most of the world, it's impossible to 'eat local' 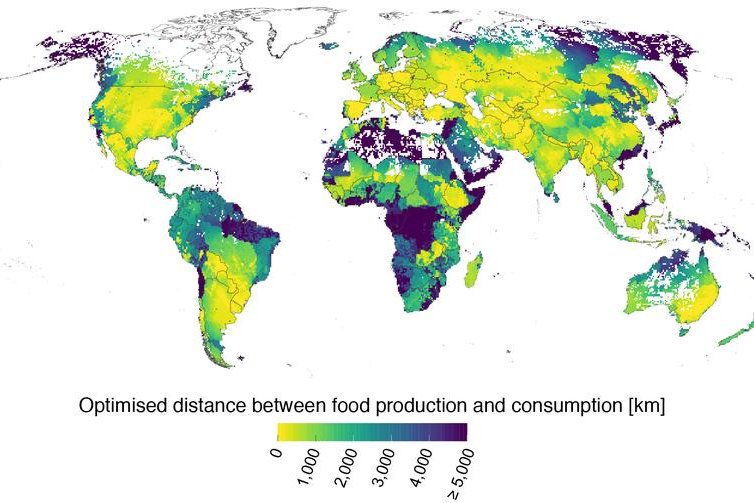 April 17 (UPI) -- Less than a third of the world's population could subsist on locally grown food, according to a new study published Friday in the journal Nature Food.

Over the last century, food production has become globalized and commercialized. The revolutionary changes have increased food availability around the world, but as the current COVID-19 pandemic has made clear, global supply chains are quite vulnerable.

The data showed just 27 percent of the world's population can source their temperate cereal grains within a radius of 62 miles. For for tropical cereals, the number was 22 percent.

Only 28 percent of the world's population can get rice within such a radius, 27 percent for pulses. The number of people capable of getting local maize and tropical roots is even smaller, between 11 and 16 percent.

Researchers determined 100 kilometers, or 62 miles, was the maximum radius in which a sustainable local food system could exist -- a so-called foodshed.

"We defined foodsheds as areas within which food production could be self-sufficient," study author Pekka Kinnunen, a doctoral researcher at Aalto University in Finland, said in a news release. "In addition to food production and demand, food fences describe the impact of transport infrastructure on where food could be obtained."

Different parts of the world can source local -- or at least domestic -- food more readily than others.

"There are big differences between different areas and the local foliage," Kinnunen said. "For example, in Europe and North America, temperate crops, such as wheat, can be obtained mostly within a radius of 500 kilometers [310 miles]. In comparison, the global average is about 3,800 kilometers [2,360 miles]."

According to the study, steps could be taken to improve the efficiency with which populations could grow and consume crops domestically. Such improvements would likely pay dividends in terms of food waste and greenhouse gas emissions. However, such changes could also worsen problems such as water pollution and water scarcity in regions with dense population centers.

"The ongoing COVID-19 epidemic emphasizes the importance of self-sufficiency and local food production," said co-author Matti Kummu, an associate professor at Aalto University. "It would be important also to assess the risks that dependence on imported agricultural inputs such as animal feed proteins, fertilizers and energy, might cause."