Fog harp can harvest water from even the lightest of fogs 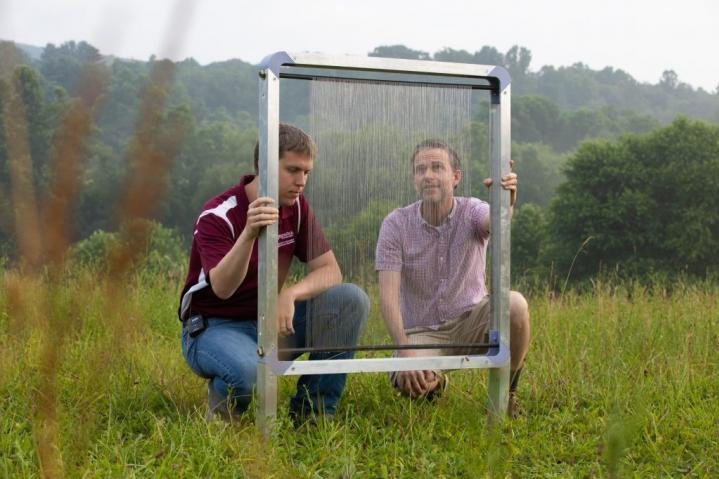 Water drops are seen on the wires of a fog harp. Photo by Peter Means/Virginia Tech University

Previous iterations of the technology, first unveiled in 2018, required dense fog to work, but the latest tests suggest the improved harp is viable in a variety of fog conditions.

The improved efficiency could allow the harp to be deployed as a sustainable water harvesting device in new parts of the world.

"Billions of people face water scarcity worldwide," Brook Kennedy, an associate professor of industrial design at Virginia Tech, said in a news release. "We feel that the fog harp is a great example of a relatively simple, low-tech invention that leverages insight from nature to help communities meet their most basic needs."

The fog harp looks like a harp, with parallel wires that collect the fog's ambient water droplets. Similar devices use screen mesh, but analysis by engineers at Virginia Tech showed parallel wires more efficiently collected water and encourage drainage into the collector.

In dense fog produced in the lab, the parallel wires outperformed mesh screens by a factor of two. In field tests, scientists pitted the fog harp against other fog harvesting devices, some with wires closer together and others with mesh screens. Fog conditions in the field were considerably lighter than the fog in the lab, but the fog harp still outperformed the competitors.

Even when fog was too light to produce water on the wires of the other devices, the fog harp was able to harvest ambient water.

Scientists described the success of their water harvesting device this week in the journal Advanced Sustainable Systems.

"We already knew that in heavy fog, we can get at least two times as much water," said Jonathan Boreyko, an assistant professor of mechanical engineering at Virginia Tech. "But realizing in our field tests that we can get up to 20 times more water on average in a moderate fog gives us hope we can dramatically enhance the breadth of regions where fog harvesting is a viable tool for getting decentralized, fresh water."