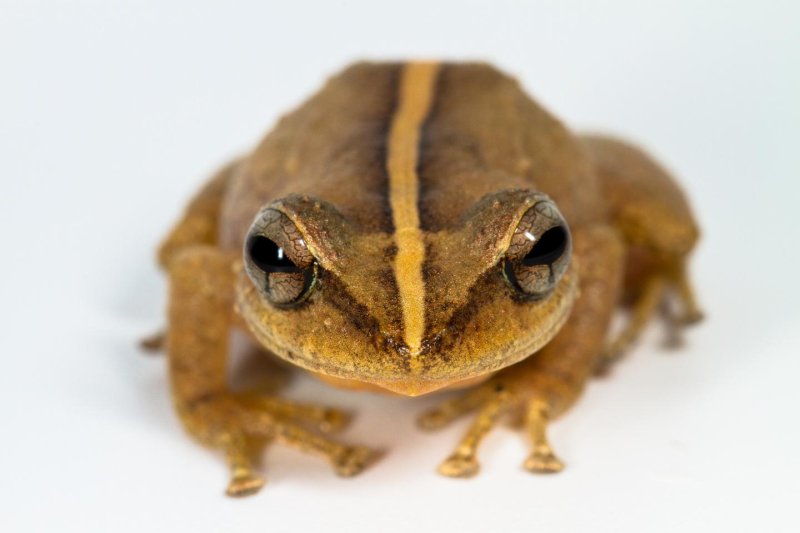 Today, frogs in the genus Eleutherodactylus, which includes the common coquí, dominate the Caribbean, having diversified into many different body forms and sizes. A newly found fossil shows they have been in the region for at least 29 million years. Photo by Alberto Lopez Torres

April 8 (UPI) -- The discovery of a tiny arm bone suggests the coquí frog has been living in the forests of the Caribbean for at least 29 million years.

The ancient arm bone -- described Wednesday in the journal Biology Letters -- is the oldest evidence of a frog living in the Caribbean. The fossil was found in Puerto Rico, where the coquí frog is much beloved.

"It's a national treasure," lead study author David Blackburn, curator of herpetology at the Florida Museum of Natural History, said in a news release. "Not only is this the oldest evidence for a frog in the Caribbean, it also happens to be one of the frogs that are the pride of Puerto Rico and related to the large family Eleutherodactylidae, which includes Florida's invasive greenhouse frogs."

The fossil was recovered from a river bank outcropping in northwestern Puerto Rico by study co-author Jorge Velez-Juarbe, an associate curator of marine mammals at the Natural History Museum of Los Angeles County.

The dig site has previously yielded fossil seeds, as well as remains of sea cows and side-necked turtles. Scientists also previously unearthed the oldest remains of rodents and gharials, a group of crocodiles, in the Caribbean.

"There have been many visits from which I have come out empty-handed over the last 14 years," Velez-Juarbe said. "I've always kept my expectations not too high for this series of outcrops."

Previously, scientists have used genetic analysis to estimate that rain frogs lived in the Caribbean during the early Oligocene Epoch, but until now, they had no fossils to prove it. Small, fragile bones and the Caribbean's hot, humid weather isn't a great recipe for preservation.

After discovering the tiny bone, Velez-Juarbe conferred with experts to identify the frog to which the fossil belonged.

Scientists suspect the Caribbean's first frogs rafted over the islands from South America during the Oligocene. Today, the Eleutherodactylus genus features 200 species. The relatives of coquí dominate the Caribbean forests.

"This is the most diverse group by two orders of magnitude in the Caribbean," Blackburn said. "They've diversified into all these different specialists with various forms and body sizes. Several invasive species also happen to be from this genus. All this raises the question of how they got to be this way."

Researchers hope additional discoveries will she more light on the early evolution of Eleutherodactylus frogs in the Caribbean.

"I am thrilled that, little by little, we are learning about the wildlife that lived in Puerto Rico 29-27 million years ago," Velez-Juarbe said. "Finds like this help us unravel the origins of the animals we see in the Caribbean today."

Science News // 6 hours ago
Long-duration space flight equal to decade of bone loss in astronauts, study says
July 1 (UPI) -- Scientists have long known that astronauts lose bone density while in space, but a study published this week found they only partially recover this loss one year after returning to Earth.

Science News // 1 day ago
Milky Way to set backdrop for summertime comet, meteor showers
July offers a slate of astronomical sights for young stargazers, those experienced with a telescope and everyone in between.

Science News // 3 days ago
Miner unearths nearly complete mummified baby woolly mammoth in Canada
A young miner called for backup when his front-end loader unexpectedly struck something in the Canadian permafrost last week on the first day of summer in the Northern Hemisphere.