ORLANDO, Fla., March 25 (UPI) -- The first official launch for the new U.S. Space Force is scheduled to lift off from Florida on Thursday afternoon with a military communications satellite aboard.

The launch is planned at 2:57 p.m. EDT from Cape Canaveral Air Force Station's Complex 41 on a United Launch Alliance Atlas V rocket with boosters attached. A two-hour launch window is in place in case of delays.

The rocket will carry the sixth in a series of next-generation satellites known as Advanced Extremely High Frequency, or AEHF. The satellites have an upgraded anti-jamming capability.

The launch also would be the first under Florida's restrictions against public gatherings due to the COVID-19 pandemic.

The military has barred public or media viewing at the station, and has required all personnel to work from home if possible, said Brig. Gen. Doug Schiess, commander of the 45th Space Wing and range director at nearby Patrick Air Force Base.

Schiess said the Space Force is taking all precautions, including rotation of launch crews and restricting interaction between those crews, and sitting further apart in the operations center.

"We wipe down all of our operations centers every time there's someone new on a console," Schiess said.

He said that neither Patrick Air Force Base nor the missile complex had positive cases of COVID-19, but that several people have been isolated and are awaiting test results after displaying symptoms of the disease.

ULA said the rocket had rolled to the launch pad Wednesday. Weather is expected to be 80 percent favorable for the launch, with a chance of cumulus clouds being the only possible problem, according to a military forecast.

Science News // 20 hours ago
Scientists discover plastic-eating microbe
March 27 (UPI) -- Scientists in Germany have identified a new strain of bacteria that breaks down the chemical building blocks of polyurethane, or PU, a polymer used to make a variety of plastic materials.

Science News // 20 hours ago
NASA's next Mars rover to carry 10.9M names, 155 essays to Red Planet
March 27 (UPI) -- NASA's Mars Perseverance rover is set to carry the names of more than 10.9 million people to the Red Planet. The names, etched onto tiny silicon chips by an electron beam, were attached to an aluminum plate on the rover.

Science News // 1 day ago
Livestock, poultry appear safe from COVID-19, expert says
In a bit of good news about the novel coronavirus, one expert says it looks like livestock and poultry don't appear to be at risk from COVID-19. 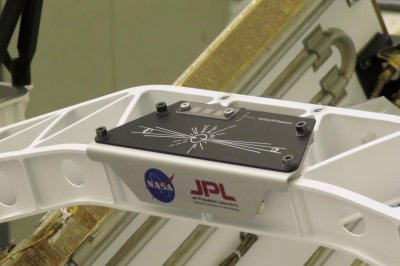