NASA's is gearing up to test fire the new SLS moon rocket's core stage on a test stand at Stennis Space Center in southern Mississippi, where huge flame buckets were being renovated in December to redirect exhaust cooled by water. File Photo by Paul Brinkmann/UPI

March 10 (UPI) -- NASA's effort to build the Space Launch System rocket to transport people to the moon by 2024 is at least 30 percent over budget and two years behind schedule, an Inspector General's report said Tuesday.

Each major part of the rocket has had "technical challenges, performance issues, and requirement changes that collectively have resulted in $2 billion of cost overruns and increases," the report from NASA's Office of Inspector General said.

The two major contractors on the rocket are Boeing, which builds the core stages, and Northrop Grumman, which makes boosters.

Part of the problem stems from the way NASA wrote the contracts, which "limits visibility into contract costs and prevents NASA from determining precise costs per element," the report said.

The first SLS rocket core stage was completed at NASA's Michoud Assembly Facility in New Orleans in January and moved to Stennis Space Center in south Mississippi for test firing.

NASA plans to test fire the rocket for eight minutes on a stand at Stennis, and then deliver it to Kennedy Space Center in Florida for launch in late November.

Missing a launch this year would result in more cost overruns, the report said.

By the end of 2020, NASA will have spent more than $17 billion on the SLS Program -- including almost $6 billion added after the original budget and schedule were adopted.

The report said Boeing's spending rate on the rocket stages will meaning adding at least $1.3 billion to the contract to complete development on two rockets by December 2021.

In a statement, Boeing acknowledged cost and schedule "challenges over the years." But the company said the investment has paid off in the development of staff and technology "to build this unprecedented deep-space rocket."

RELATED NASA: Boeing software team had too much power over Starliner capsule

"The hard-earned experience acquired during initial SLS development is resulting in significant savings and efficiencies in subsequent development and production," Boeing said.

NASA concurred with the findings of the report in a formal response by Douglas Loverro, associate administrator for human exploration. Specifically, his response said NASA was separating each component or milestone into a separate line item to track spending better.

"NASA has made significant improvements since 2018, and the agency is continuing improvements in sustainability, accountability and transparency," Loverro wrote.

The report recommended NASA inform Congress of the budget and schedule details, and Loverro agreed. 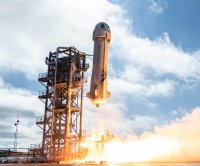 Science News // 4 days ago
Monkey study highlights brain biology behind 'doomscrolling'
June 11 (UPI) -- The results of a novel monkey study helped scientists pinpoint the region of the brain that dictates whether people seek out or avoid potentially negative information.

Science News // 4 days ago
Astronomers find 'blinking giant' star at the center of the Milky Way
June 11 (UPI) -- Astronomers have discovered a giant, blinking star in the middle of the Milky Way, roughly 25,000 light-years from Earth.
Advertisement