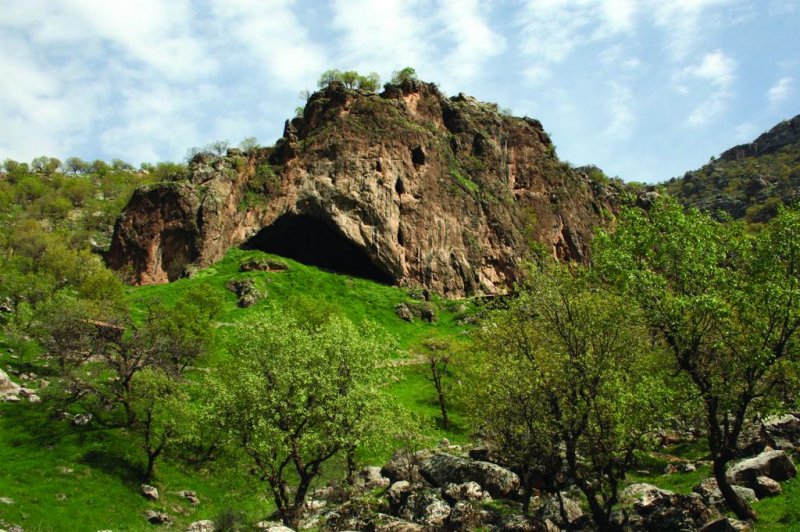 The entrance to Shanidar Cave, in the foothills of the Baradost Mountains of North-East Iraqi Kurdistan, where researchers recovered a fully articulated Neanderthal skeleton. Photo by Graeme Barke/McDonald Institute of Archaeology/University of Cambridge

Feb. 18 (UPI) -- Scientists have recovered a fully articulated Neanderthal skeleton, the first in 20 years, from the "flower burial" site at Shanidar Cave in Iraqi Kurdistan.

The remains, torso bones and crushed skull, have offered researchers a chance to study the burial practices of Neanderthals.

Roughly half a century ago, the partial remains of ten Neanderthal men, women and children were excavated from Shanidar Cave. Some of the remains were lumped together, and archaeologist Ralph Solecki, who led the dig, found clumps of pollen around one of the skeletons.

Solecki argued the arrange of the bodies and the large concentrations of pollen proved Neanderthals purposefully buried their dead and performed funeral rites involving flowers.

RELATED Neanderthals had the teeth to eat hard plants

In the decades that followed, there was much disagreement over the significance of Solecki's discovery and his interpretation of the evidence.

When a team of international scientists decided to revisit the famous sit, they set out only to recover sediment samples -- and ended up finding the remains of another Neanderthal, dubbed Shanidar Z.

The team of researchers, mostly from Britain and Iraqi Kurdistan, wanted to go back to the flower burial site to utilize new technologies.

"So much research on how Neanderthals treated their dead has to involve returning to finds from sixty or even a hundred years ago, when archaeological techniques were more limited, and that only ever gets you so far," Emma Pomeroy, an archaeologist at the University of Cambridge, said in a news release. "To have primary evidence of such quality from this famous Neanderthal site will allow us to use modern technologies to explore everything from ancient DNA to long-held questions about Neanderthal ways of death, and whether they were similar to our own."

In 2016, while collecting sediment samples from the deepest part of the cave's trench, researchers found a rib bone.

"We thought with luck we'd be able to find the locations where they had found Neanderthals in the 1950s, to see if we could date the surrounding sediments," said Graeme Barker, professor at Cambridge's McDonald Institute of Archaeology. "We didn't expect to find any Neanderthal bones."

After the rib, several lumbar vertebra emerged. Next, archaeologists recovered the remains of a clinched fist. Eventually, scientists found a skull and almost all of the body's torso, as well as the other fist.

Their early analysis of the remains, published this week in the journal Antiquity, suggests the remains are 70,000 years old.

Researchers on the project are currently working to create a digital reconstruction of the Neanderthal fossil, as well as analyzing bits of shell and the remains of ancient mice and snails to better understand the changes in climate that were happening 70,000 years ago. Researchers are also analyzing traces of pollen and charcoal to learn what Neanderthals sheltering in Shanidar Cave might have been cooking and eating.

Scientists are still in the early stages of analyzing the new evidence uncovered from the Shanidar Cave, but according to the new study, the initial findings suggest the burials were purposeful.

"The new excavation suggests that some of these bodies were laid in a channel in the cave floor created by water, which had then been intentionally dug to make it deeper," said Barker. "There is strong early evidence that Shanidar Z was deliberately buried."

Solecki's discovery, 50 years ago, was one of the first to suggest to Neanderthals were more than animalistic brutes.

Over the last decade, his interpretation has largely been vindicated. Scientists have found ample evidence that Neanderthals were innovative, adaptable and surprisingly sophisticated, capable of starting their own fires, creating complex tools and producing rock art.

"In recent years we have seen increasing evidence that Neanderthals were more sophisticated than previously thought, from cave markings to use of decorative shells and raptor talons," Pomeroy said. "If Neanderthals were using Shanidar cave as a site of memory for the repeated ritual interment of their dead, it would suggest cultural complexity of a high order."

Science News // 1 day ago
Rare meteor storm possible over Memorial Day weekend
Meteor showers are among the most enjoyable astronomy events, with shooting stars streaking through the sky as Earth plows through a field of debris left behind by a comet.

Science News // 1 day ago
Scientists sequence genome from Pompeii victim's DNA for first time
May 26 (UPI) -- Scientists have sequenced the genome from a man who died in the 79 A.D. eruption of Mount Vesuvius in the ancient city of Pompeii for the first time.

Science News // 2 days ago
Mars, Jupiter will converge before dawn Sunday
Mars and Jupiter will make an exceptionally close encounter in the pre-dawn sky during the extended Memorial Day weekend, an astronomical event known as a conjunction.

Science News // 2 days ago
Lidar study reveals much more dense early urban Amazon settlements
May 25 (UPI) -- Evidence of early urbanism has been found in the Amazon through the first-time use of Light Detection and Ranging technology.

Science News // 3 days ago
Scientists discover fossil of massive flying 'Dragon of Death'
May 24 (UPI) -- Scientists have uncovered the remains of one of the largest pterosaurs on record, in Argentina, according to a study published Tuesday in the journal Cretaceous Research.