Feb. 14 (UPI) -- A study of ichthyosaurs, fish-like marine reptiles now extinct, shows the species adapted quickly but a stagnation in development led to their demise.

Results of the University of Bristol study, published Friday in the journal Communications Biology, indicates an early burst of evolution in ichthyosaurs during the Mesozoic Era, with high rates of variation which quickly diminish.

That time period, between 250 million and 90 million years ago, included the age of dinosaurs on land, and predator reptiles, like the 100 known species of ichthyosaurs in the seas.

The study used computational methods to ichthyosaurs' skull size and skeleton. All methods show successful early adaptation, followed a lack of change and then extinction.

"Ichthyosaurs are a fascinating group of animals to work on because they evolved so many adaptations for living in water very quickly: a fish-like body and tail fin, giving birth to live young rather than laying eggs, and lots of different feeding styles," Dr. Ben Moon, research leader, said in a press release. "Because of this we expected to see a rapid evolution early after ichthyosaurs first appeared, but we were staggered by just how big this early burst was and how relatively short it was."

The evidence points to a bottleneck in the reptiles' development 200 million years ago, at a time when other predators achieved dominance. It lead to a long-term reduction in evolutionary rates and disparity.

The research also suggests ichthyosaurs, which grew up to 70 feet long, remained common but developed less variety between species in their 100 million-year existence.

"It may well have been the ichthyosaurs' decreasing evolutionary rates which made them less able to adapt quickly, and therefore less diverse and competitive, allowing other marine reptiles to take over as the top predators," said co-author Dr. Tom Stubbs.

RELATED Volcanism didn't play a role in demise of dinosaurs

Science News // 15 hours ago
Humans in Asia survived Toba super-eruption 74,000 years ago
Feb. 25 (UPI) -- Scientists argue Homo sapiens arrived in Asia much earlier than previous estimates, and that the impact of the Toba super-eruption on climate and environment has been overstated. 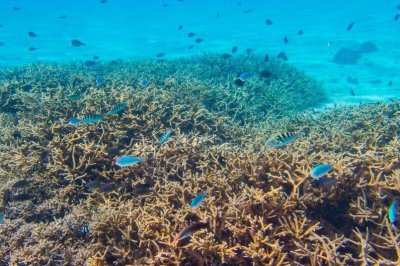