Feb. 13 (UPI) -- Cassiopea jellyfish, or upside-down jellyfish, are found in warm coastal waters all over the world. They often congregate on the seabed and pulse rhythmically.

As many scientists and recreational swimmers can attest, these jellyfish can elicit a skin reaction from afar -- a sting without contact. Encounters with so-called stinging water can cause a person's skin to sting and itch.

Finally, scientists have an explanation for this phenomenon. According to a new study, published Thursday in the journal Nature Communications Biology, upside-down jellyfish are capable of launching miniature venom grenades called cassiosomes.

The authors of the new study had previously experienced stinging water themselves. They had a few theories about the phenomenon.

"We thought it might be caused by bits of jellyfish tentacles, a larval stage of jellyfish or sea anemones or some other unexplained phenomenon," lead author Cheryl Ames, museum research associate and associate professor at Tohoku University in Japan, told UPI in an email.

Researchers had previously noticed clouds of mucus being expelled by groups of upside-down jellyfish but had yet to study it. When they finally did, they were able to solve the mystery of stinging water.

"The answer was right under our noses. We took the mucus and put it under a microscope and when we saw the tiny gyrating self-propelled masses, we knew we were onto something new to science," Ames said. "Using high-tech microscopy methods, our team discovered that the cassiosome outer layer is lined with thousands of jellyfish stinging capsules called nematocysts. Nematocysts are toxin-filled capsules normally found in the tentacles."

The little venom grenades contained other types of cells, too, including cilia, which are waving, hairlike filaments responsible for the gyrations of the cassiosomes. Researchers also found little bits of algae inside the mucus balls, the same endosymbiotic dinoflagellates that live inside upside-down jellyfish.

"We hypothesize that they are used as a means of defense. Indeed, we and many others who swim near large concentrations of these animals find that it can be unpleasant," said study co-author Allen Collins, zoologist and curator at Smithsonian's National Museum of Natural History. "With many cassiosomes in the water column, one can be stung without coming into contact with the jellyfish. One can imagine that the same would be true of fish."

Scientists suspect the mucus expelled by upside-down fish could also aid feeding by incapacitating small species nearby. The mucus-trapped prey could be ingested later, but researchers did not directly observe this process.

The authors of the new study found this ability to expel little balls of venom is not unique to Cassiopea xamachana, the upside-down jellyfish.

"These other species do not live upside down on the sea floor like Cassiopea," Collins said. "Instead, they swim like most other jellyfish. So, the cassiosomes are not uniquely tied to the unusual upside down behavior of Cassiopea."

Science News // 18 hours ago
Tiny Mars helicopter set for first flight Sunday
April 9 (UPI) -- NASA's plan to fly a helicopter on Mars comes to fruition Sunday with an attempted 40-second climb to just 10 feet, but agency officials say they hope to make bolder efforts in the next few weeks. 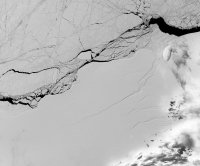 Science News // 2 days ago
Continued warming to put one-third of Antarctic ice shelves at risk of collapse
April 7 (UPI) -- If global temperatures reach 4 degrees Celsius above preindustrial levels, more than a third of the Antarctic's ice shelf will be at risk of collapse, according to new models.