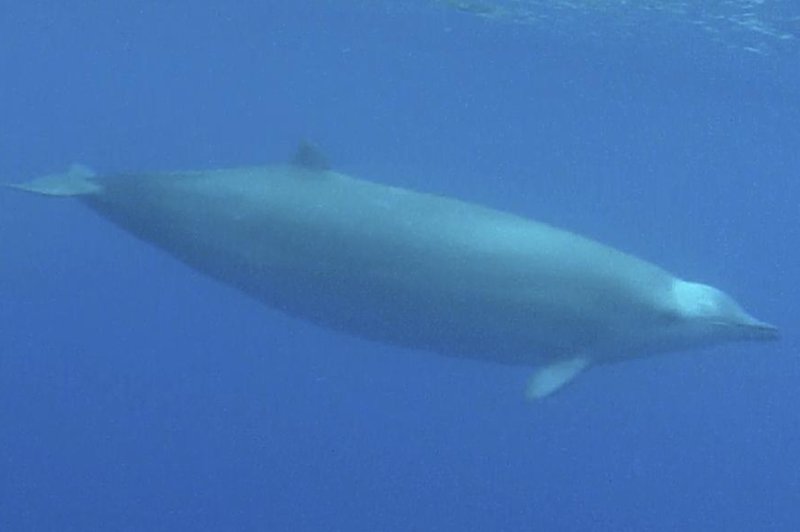 Feb. 7 (UPI) -- Beaked whales rely on synchronization and silence to avoid predation during their deep dives to hunt for food.

In a new study, scientists successfully tagged two beaked whales from the same social group on three separate occasions -- once in the Canary Islands, another time off the coast of Italy and once in the Azores. The sensors allowed researchers to track their dive patterns and vocalizations.

"In all cases the pairs of whales dove in extreme synchrony," Natacha Aguilar de Soto, marine biologist at the University of La Laguna in Spain, said in a news release. "They also coordinated the depth and time when they started and ended foraging with echolocation at depth. This is in spite of them separating during the foraging, or deepest, part of the dive to hunt independently."

Beaked whales are a group of toothed whales that include as many as 22 different species, though only four are well known by scientists. They're found in all of the planet's major oceans.

While hunting individually, beaked whales use echolocation clicks to find and capture their prey. Slower clicks and the echoes that bounce back help the whales track prey across long distances, while fast click series, or buzzes, offer faster echo returns that help the whale chase down and capture the prey.

"We think they also use those sounds to keep track of each other," de Soto said.

The newly recorded tracking data -- detailed this week in the journal Scientific Reports -- showed the whales, after hunting on their own, reconvene at a depth of approximately 2,500 feet beneath the ocean surface. The group of whales then ascend silently to the surface.

"In the last third of the dive they stop making sound and ascend in a seemingly random direction, covering 1 kilometer [0.6 miles] or more horizontally, and yet manage to stay together," de Soto said.

By keeping quiet and ascending in sporadic patterns, researchers estimate the beaked whales avoid predation by killer whales. The behavior isn't without its costs. The time required for reconvening and slowly ascending in unpredictable directions requires nearly an hour, reducing the amount of time the beaked whales can spend actually hunting. Other deep diving whales that don't use such extreme coordination hunt for roughly 35 percent longer.

"Other deep diving whales such as pilot and sperm whales can rely on the strength of their numerous groups and powerful muscles to defend against killer whale attacks," de Soto said.

According to de Soto, the new research could explain why beaked whales appear to be especially sensitive to sonar. Previous studies have revealed links between Navy sonar exercises and beaked whale strandings.

"Our results suggest that beaked whale behavior is highly tuned to avoid predators. Beaked whales don't want to take chances, and so any unusual sound that could possibly be from a predator may trigger a strong evasive behavior," de Soto said. "This is a strategy that has worked over millions of years but the invention of sonar has brought a whole new set of sounds into the water that beaked whales cannot know are not from predators."