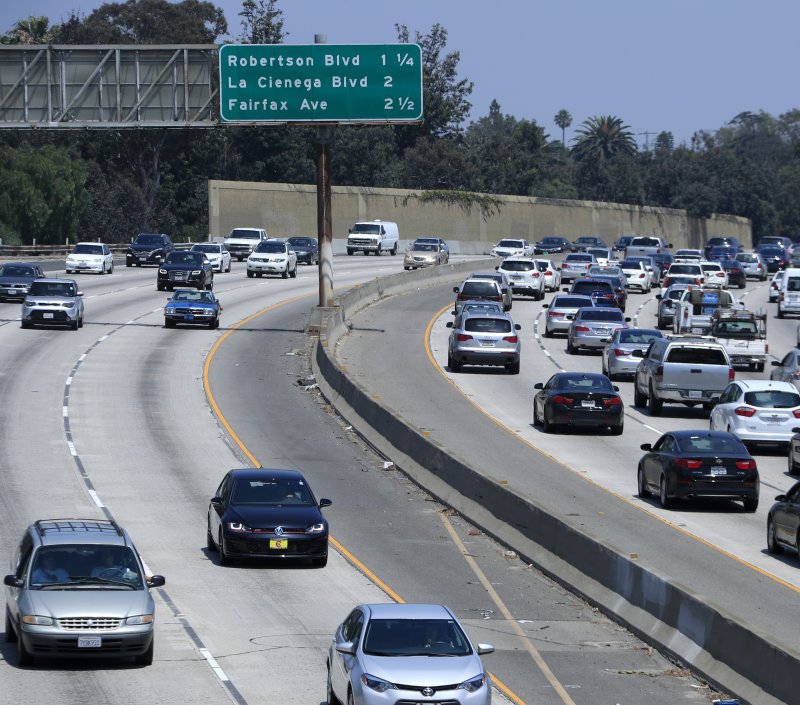 Scientists say they have developed a hydrogen fuel cell system with the potential to significantly reduce carbon output from a range of sources, including cars and airplanes. File Photo by Mike Nelson/EPA

Luckily, scientists in China have discovered a new technique that could be used for real-time, on-demand hydrogen generation.

The technology relies on a unique metal alloy featuring gallium, indium, tin and bismuth. When the alloy is pressed to an aluminum plate submerged in water, hydrogen is produced. The hydrogen is funneled directly to a proton exchange membrane fuel cell, PEMFC, which converts the chemical energy into electrical energy.

"Compared with traditional power generation methods, PEMFC inherits a higher conversion efficiency," study author Jing Liu, a professor at the Chinese Academy of Sciences and Tsinghua University, said in a news release. "It could start rapidly and run quietly. Moreover, a key benefit to this process is that the only product it generates is water, making it environmentally friendly."

Scientists were able to improve on previous on-board hydrogen generation methods by adding bismuth to the alloy. When bismuth was added to the mix, the reaction that generates hydrogen proved more stable and durable. Scientists hope to find a way to recycle the bismuth to make the new technology more eco-friendly and cost-effective.

"There are various problems in existing methods for post-reaction mixture separation," Liu said. "An acid or alkaline solution can dissolve aluminum hydroxide but also causes corrosion and pollution problems."

The authors of the new technology, described this week in the Journal of Renewable and Sustainable Energy, acknowledged that their prototype will need to be optimized in other ways, too, before it is commercialized. Specifically, the scientists need to find a way to better dissipate the heat created during the hydrogen reaction process.

If the potential of the technology is realized, it could help hydrogen fuel cell technology overcome one of the biggest obstacles to its widespread adoption, the need for fuel transportation infrastructure.

"The merit of this method is that it could realize real-time and on-demand hydrogen production," said Liu. "It may offer a possibility for a green and sustainable energy era."