Outside of humans, chimpanzees are one of the only species known to cooperate with unrelated individuals to achieve a common goal, like defending territory from mutual rivals. 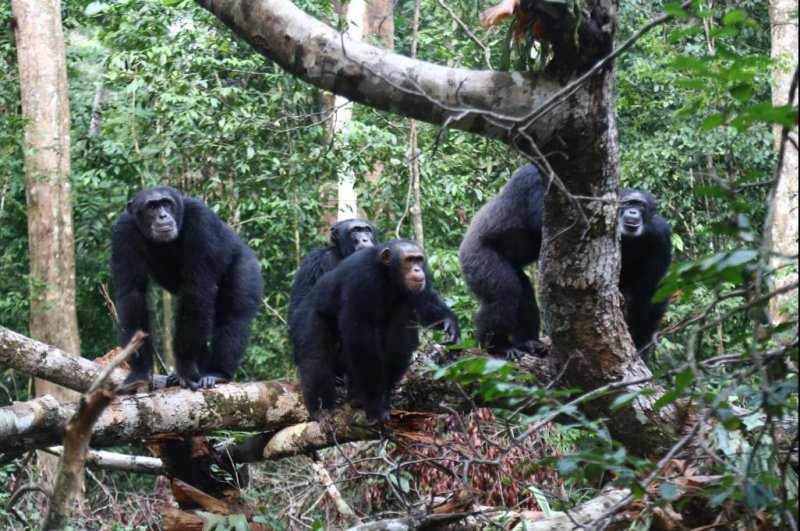 Groups of chimpanzee often fight over territory, but the apes are also known to cooperate with non-kin groups to defend territory against mutual rivals. Photo by Liran Samuni/MPG

Jan. 3 (UPI) -- Outside of humans, chimpanzees are one of the only species known to cooperate with unrelated individuals to achieve a common goal, like defending territory from mutual rivals.

What motivated chimps to work together? At least one possibility, new research suggests, is that conflict has a negative impact on wild female chimpanzees' reproductive success.

"We developed a new index of neighbor pressure that reflects the danger of intrusion by neighboring groups into one's territory," Sylvain Lemoine, researcher with the Max Planck Institute for Evolutionary Anthropology, said in a news release. "We show that high neighbor pressure during the time when females are supposed to resume reproduction is associated with a delay in reproduction, leading to longer intervals between births. We also show that having many males in a group is advantageous and speeds up reproduction."

The findings, detailed this week in the journal Current Biology, offer one possible explanation for the origins of cooperation. Groups that diminished the chance of conflict by cooperating likely produced more offspring.

"These physiological mechanisms remain to be examined, as well as the potential efficiency of in-group cooperation to reduce the received pressure from neighbors, such as cooperative border patrols regularly observed in wild chimpanzees," said Catherine Crockford, a researcher with the Max Planck Institute.

The same factors that motivated chimpanzees, our closest relatives, to cooperate, may have also motivated the earliest humans to work together.

"For highly territorial species, including humans, these findings shed light on how between-group competition could have acted as a selective pressure favoring the evolution of particular traits, such as group-level cooperation with non-kin, and how this could have shaped our ancestors," Max Planck Institute Roman Wittig said.

Science News // 9 hours ago
NASA delays Mars helicopter flight again for software update
ORLANDO, Fla., April 13 (UPI) -- NASA has postponed the flight of the Mars helicopter Ingenuity, the first controlled flight on another planet, to work through a software problem.

Science News // 17 hours ago
Experts: NASA will continue working with Russia on space despite China plan
ORLANDO, Fla., April 13 (UPI) -- Russia and NASA will continue to cooperate in space in the near future, even as Russia moves to work with China on lunar exploration, experts said.