Most of Madagascar's rainforest on pace to disappear by 2070 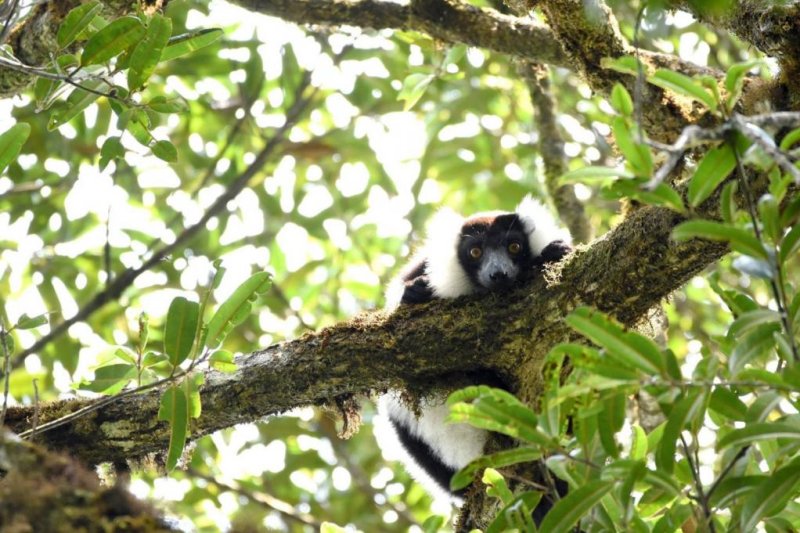 Ruffed lemurs provide vital ecosystem services to Madagascar's rainforest by spreading a variety of seeds across the forest floor. Photo by Rabe Franck/CUNY

Jan. 2 (UPI) -- Nearly all of Madagascar's eastern rainforest is likely to be gone by 2070 if deforestation and global warming progresses at the current pace, according to a new study.

Nearly 90 percent of the biodiversity found on Madagascar is unique to the island nation, but the latest findings -- published this week in the journal Nature Climate Change -- suggests Madagascar's many novel plants, mammals, reptiles and amphibians are likely to face significant habitat losses.

Over the last few decades, Madagascar's rainforest has been subjected to deforestation and overharvesting. Scientists used predictive models to simulate the impacts of human-caused climate change and deforestation on the island's vital habitat.

Scientists also analyzed the results of two surveys of two critically endangered ruffed lemur species. These apes, found nowhere else on Earth, provide the forest with vital ecosystem services. But as several studies have previously shown, many of Madagascar's lemur populations are rapidly declining.

"Because of their essential role as seed dispersers and their sensitivity to habitat degradation, ruffed lemurs serve as a critical indicator of the health of Madagascar's entire eastern rainforest," Andrea Baden, a professor of anthropology at the Graduate Center of the City University of New York, said in a news release.

Models showed that if global warming and deforestation continue at their current pace, roughly half of all available lemur habitat could disappear over the next few decades.

"Even more alarming, these two factors together are projected to essentially decimate suitable rainforest habitat by the end of the century," Baden said.

The latest study suggests there are things policy makers and conservationists can do to protect lemurs and other members of the island's rainforest ecosystems. Protections for vital habitat and policies designed to curb deforestation rates could insulate the most vulnerable species from further declines.

Because ruffed lemurs are so important to the health of the rainforest, protecting their habitat can help safeguard dozens of other species. In addition to making large swaths of Madagascar's remaining rainforest off-limits to loggers and developers, researchers suggest conservation efforts focus on protecting corridors that connect large pockets of healthy lemur habitat.

"The results from our study will be useful to nonprofit organizations, park management, and the broader conservation community," Baden said. "Our results indicate potential conservation opportunities for ruffed lemurs and any of the rainforest-dwellers that rely on forest cover and connectivity. Protected areas are vital to species persistence."