Planet Earth is surrounded by thousands of sizable pieces of space junk, as well as millions more small pieces of debris. Photo by Pixabay/CC

Dec. 26 (UPI) -- There are increasingly vast amounts of space junk circling Earth, and tracking the millions of pieces of debris is exceptionally difficult. But thanks to a new set of algorithms, laser-guided telescopes can now spot small pieces of space litter.

The technology, described this week in the Journal of Laser Applications, could be used to keep satellites and spacecraft in low Earth orbit safe from collision.

"After improving the pointing accuracy of the telescope through a neural network, space debris with a cross sectional area of 1 meter squared and a distance of 1,500 kilometers can be detected," Tianming Ma, a researcher with the Chinese Academy of Surveying and Mapping in Beijing and Liaoning Technical University in Fuxin, said in a news release.

Laser ranging telescopes bounce laser beams off of faraway objects to measure their distance, but because the reflected signals are often very weak, their accuracy isn't very reliable. Researchers applied a newly developed neural network, software that replicates the processing patterns of the human brain, for laser ranging telescopes to boost their pointing abilities.

To pick up on especially weak signals, laser-ranging telescopes have to be made extremely sensitive, introducing the problem of false positives. Researchers used a pair of neural network algorithms to help the telescopes recognize the weak signatures of small pieces of space debris and to stabilize pointing abilities of the telescopes.

"In this process, first, the observation data of 95 stars are used to solve the coefficients of the four models, and then the pointing accuracy of the telescope corrected by those four models is verified by the detection results of 22 stars," researchers wrote in their paper.

Science News // 3 hours ago
Blue Origin scrubs Friday launch over vehicle issue
May 18 (UPI) -- Aerospace manufacturer Blue Origin will delay its next sub-orbital spaceflight because of a vehicle issue, the company announced Wednesday. 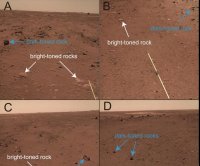