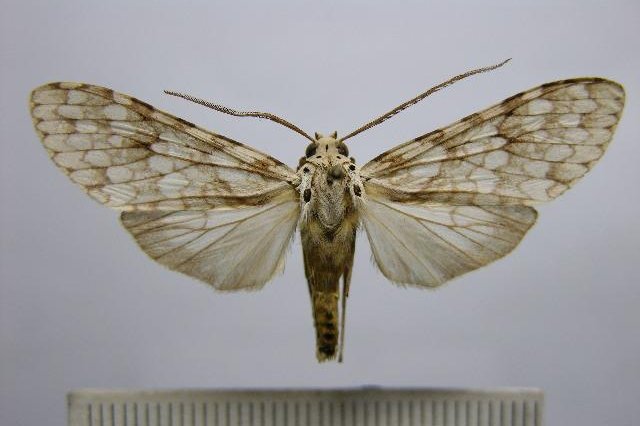 Some moths do not engage in evasive maneuvers to avoid predators such as bats because they know they're less appetizing. Pictured is one of the so-called lazier moths that helped researchers make the finding, Carales arizonensis. Photo by Benoit Vincent/BOLD Systems/Wikimedia

Dec. 16 (UPI) -- Prey rely on all sorts of defense mechanisms to evade hungry predators. For at least a few moth species, the defense comes with a side of indifference.

While studying predator-prey interactions, scientists noticed some tiger moth species appeared unfazed by attacking bats. While most moths use aerial maneuvers, swoops and dives, to avoid getting eaten, a few lazily fluttered as if danger was faraway.

Nicolas Dowdy, of the Milwaukee Public Museum and Wake Forest University, hypothesized that the lazier moths had evolved chemical defenses that make them taste bad.

RELATED Insect biodiversity has declined by a third on some landscapes

Midair ducks and dives increase the odds of a collision with a spider web. An erratic aerial maneuver might also take a moth off the track of a potential mate or food source.

Dowdy hypothesized that some moths decide to play it safe and avoid the risks.

To test the hypothesis, he and his research partners released several tiger moth species into the night sky in a place frequented by hungry bats. Infrared cameras helped the researchers capture the predator-prey interactions.

In addition to tracking the flight patterns of each moth, the cameras also helped scientists observe whether bats consumed a moth or spit it out after catching the insect.

Dowdy and his partners published their observations on Monday in the journal Frontiers in Ecology and Evolution.

The authors of the new studied measured the chemical makeup of different tiger moth species and estimated how palatable each were. Using their predator-prey interaction data, researchers were then able to estimate which moths would prove to be lazy fliers and which would swerve and dive to avoid bats.

Scientists estimate that they could use their research -- and the newfound relationship between bitterness and lazy flying -- to determine the flying styles of extinct insects.

Global warming is causing moths in the tropics to shrink

Science News // 16 hours ago
NASA awards contract for 3D-printed construction on moon, Mars
Nov. 29 (UPI) -- Texas-based startup ICON has landed a five-year, $57 million contract from NASA to 3D-print landing pads, roads and shelter on the moon and on Mars.

Science News // 1 week ago
NASA temporarily loses communication with Orion spacecraft
Nov. 23 (UPI) -- Communication between NASA's Mission Control Center in Houston and the Artemis I moon mission spacecraft was lost for 47 minutes Wednesday morning. A ground side reconfiguration resolved it, according to NASA.

Science News // 1 week ago
Study says the heaviest flying bird seems to self-medicate with plants
Nov. 23 (UPI) -- The great bustard actively seeks out medicinal plants that can kill pathogens, according to a study published Wednesday in Frontiers in Ecology and Evolution. The study suggests the large birds may be self-medicating.
Advertisement