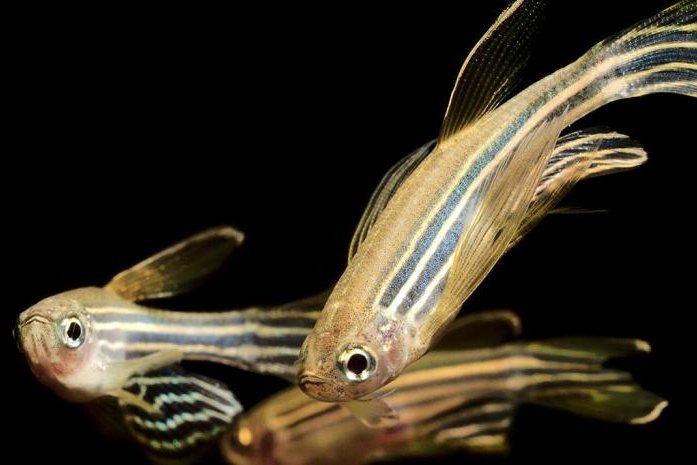 Zebrafish rely on their balance system to drive the development of body-limb coordination. Photo by Dan Olsen/NYU School of Medicine

Oct. 8 (UPI) -- Nobody likes to feel dizzy and off-balance. Whether you're a human or a zebrafish, your body craves balance. According to a new study, it is this need for balance that drives the development of body-limb coordination.

In the lab, scientists studied the movements of zebrafish larvae, which develop while swimming. Researchers watched for changes in movement patterns linked with neural circuits responsible for balance.

"The relationship between balance and movement is broken in rare diseases like Developmental Coordination Disorder, and in ataxias, the movement problems that occur in patients with multiple sclerosis and in those who have had a stroke," lead researcher David Schoppik, an assistant professor of neuroscience at the NYU School of Medicine, said in a news release. "Our hope is that the work in fish guides the future development of therapies for disorders caused by the brain's mishandling of balance cues as it coordinates muscle groups."

To keep from toppling forward, humans learn to swing their arms and flex their trunk muscles as they walk, but until now, scientists weren't sure which sensations drive the development.

Across evolution, animals have shown a preference for horizontal positioning. On land, gravity allows animals to use a variety of senses to maintain their horizontal perspective. For example, humans can sense the amount the soles of their feet are pressing into the ground relative to one another.

Fish, on the other hand, don't have much of a sense of gravity. They maintain their balance using the signal from their vestibular organs.

In the lab, scientists watched zebra fish larvae combine upward-orienting body rotations with lift-producing pectoral fin motions to rise in the water column. As the fish got older, they got better at coordinating the movements and maintaining their balance.

When scientists disabled the zebrafish's balance system, called the utricular otoliths, the larvae didn't get better at performing the swimming motion as they got older. Like young, uncoordinated larvae, maturing zebra fish with their utricular otoliths disabled were more likely to whiz upwards nose-first.

When researchers disabled the cerebellum, the zebra fish used their lift-generating pectoral fins to both rise in the water column and during dive attempts. The experiments -- detailed this week in the journal eLife -- confirmed the importance of the cerebellum for motor coordination.

"Our work shows that the fish brain uses information about balance to generate the right combination of muscle contractions to swim effectively," said study co-author David Ehrlich, a post-doctoral scholar in Schoppik's lab. "Now that we know these fish are capable of elegant coordination, we can measure brain activity to understand how and where coordinated movements are composed."

Science News // 12 hours ago
Mars, meteors: December's must-see astronomy events
December features the longest nights of the year, and the final month of 2022 will be packed with astronomical happenings ranging from the most active annual meteor shower to the best views of Mars since 2020.

Science News // 2 days ago
NASA awards contract for 3D-printed construction on moon, Mars
Nov. 29 (UPI) -- Texas-based startup ICON has landed a five-year, $57 million contract from NASA to 3D-print landing pads, roads and shelter on the moon and on Mars.