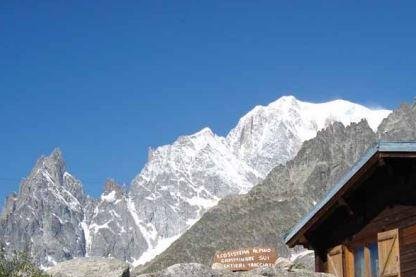 Roads were closed and mountain homes were evacuated on Wednesday in anticipation of the collapse of a glacier on Italy's Mont Blanc. Photo courtesy of Courmayeur, Italy/Official Tourist Office

Sept. 25 (UPI) -- Local authorities closed roads and evacuated homes on Wednesday on the Italian side of Mont Blanc, fearing the collapse of a portion of the mountain's glacier.

The mountain, 15,777 feet tall and the highest of the Alps, sits on the border between France and Italy.

The collapse of the Planpincieux glacier on the Italian side could involve the sudden movement of nearly 900,000 cubic feet of ice, officials said. The glacier sits astride the Grandes Jorasses mountain of the Mont Blanc massif, or complex of summits. Glaciers provide fresh water, and their rapid retreat is regarded as a symptom of climate change.

"These phenomena once again show how the mountain is going through a period of major change due to climate factors and, therefore, it is particularly vulnerable," said Stefano Miserocchi, mayor of the nearby town of Courmayeur.

Miserocchi closed local roads after warnings that the glacier's movement had accelerated by two feet per day. Scientists have been monitoring the glacier since 2013. The glacier has lost up to 90 percent of its volume of ice since 2006.

The mayor added that there is no current threat to the area's resorts and ski areas, but mountain homes have been evacuated.

"The news that part of Mont Blanc risks collapsing is a warning that should not leave us indifferent," said Italian Prime Minister Giuseppe Conte, in New York for the United Nations General Assembly "It must shake us all and force us to mobilize."