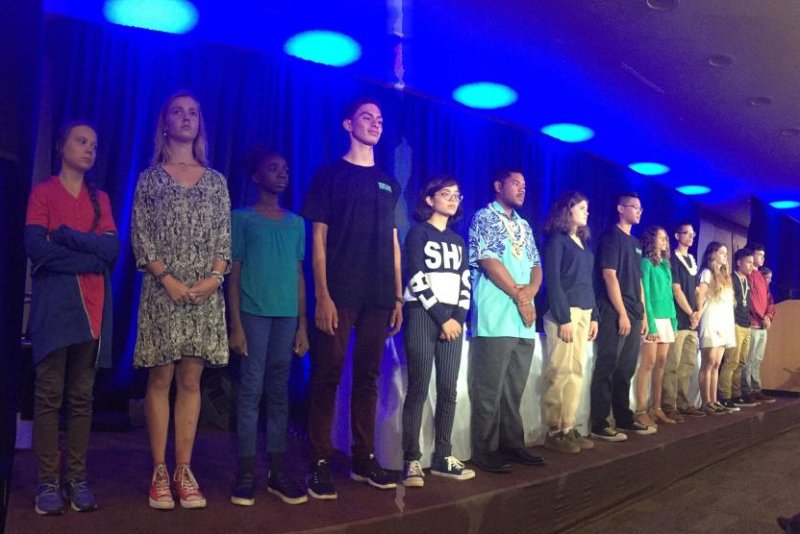 Sixteen young climate activists, including Greta Thunberg, on Monday sued five nations for violating their rights as children because of their inaction on climate change. Photo courtesy of UNICEF/Twitter

Sept. 23 (UPI) -- Swedish climate activist Greta Thunberg and 15 other children have filed a lawsuit against five countries over the climate change crisis.

According to the suit, Germany, France, Brazil, Argentina and Turkey have violated the activists' rights as children. The five named countries are parties to the Convention on the Rights of the Child, a treaty signed by dozens of nations 30 years ago.

"This complaint involves young people holding their guardians, us adults, to account for failing in our 'duty of care,'" Kirsten Davies, an international law expert at Macquarie University in Australia, told Earther.

Several of the plaintiffs are from islands threatened by rising sea levels.

"Our homes are being swallowed by the ocean, the places where memories are made," Carlos Manual, a teenager from Palau, a nation consisting of 340 islands in the South Pacific, said at a press conference announcing the suit. "I am standing in front of you because I care about my generation."

The five countries named in the suit boast major economies and have contributed millions of tons of CO2, but the lawsuit clearly leaves several major emitters out -- most obviously, the United States and China.

Neither China nor the U.S. can be listed in the lawsuit because the two countries have yet to sign the part of the Convention on the Rights of the Child treaty that allows young people to seek justice for violations to the agreement.

The United States has put more CO2 into Earth's atmosphere than any other country, while China is currently the planet's largest carbon emitter.

Thunberg, who has become the de facto leader of the youth climate movement, addressed attendees of Monday's Climate Action Summit at the UN headquarters.

"You are failing us," Thunberg told the politicians and policy makers assembled at UN headquarters. "But the young people are starting to understand your betrayal. The eyes of all future generations are upon you. And if you choose to fail us I say we will never forgive you. We will not let you get away with this. Right here, right now is where we draw the line. The world is waking up. And change is coming, whether you like it or not."

The lawsuit does not seek monetary damages. If the suit is upheld, the UN would be forced to classify the climate change crisis as a human rights crisis.

Microbes from Earth could temporarily survive on Mars