Scientists to use near-Earth object telescope to observe cosmic mergers

Scientists have enlisted an asteroid-hunting telescope to find the cosmic merger events responsible for gravitational waves -- events like the merging of two neutron stars, illustrated here. Photo by NASA

Aug. 16 (UPI) -- Scientists have reprogrammed the Catalina Sky Survey's near-Earth object telescopes to look for both asteroids and cosmic mergers.

"Catalina Sky Survey has all of this infrastructure for their asteroid survey," Michael Lundquist, postdoctoral research associate at the University of Arizona, said in a news release. "So we have deployed additional software to take gravitational wave alerts from LIGO, the Laser Interferometer Gravitational-Wave Observatory, and the Virgo interferometer then notify the survey to search an area of sky most likely to contain the optical counterpart."

The Catalina Sky Survey telescopes will continue to look for asteroids, but it will scan parts of the sky that LIGO and Virgo observations suggest is likely to feature the optical signals of mergers, the cosmic events thought to be responsible for producing gravitational waves.

The Catalina Sky Survey began its new approach to sky-gazing in April. In the first month, the telescopes were alerted to look for three potential massive collisions.

RELATED Astronomers find a pair of galaxy clusters about to collide

Tracing gravitational waves to the origins and finding the event's optical counterpart is difficult. Scientists have mostly taken a precise approach, using small telescopes with narrow fields of view. The Catalina Sky Survey uses a 60-inch telescope with a wide field of view to image large swaths of sky in just half-an-hour.

Researchers built a sophisticated algorithm to analyze LIGO and Virgo data and help the Catalina Sky Survey determine what to look for. The team of astronomers described their new survey software this week in the Astrophysical Journal Letters.

Initially, the April alerts triggered the search for 20,000 objects, but the machine-learning algorithm narrowed down the search to five potential objects.

The first of the three events was a merger of two black holes.

"There are some people who think you can get an optical counterpart to those, but it's definitely inconclusive," Lundquist said.

The second event was a merger of two neutron stars -- the giant, dense cores of collapsed stars.

While the survey failed to find any corresponding optical signals for the potential merger of objects, astronomers did identify a supernova.

"We also found a near-Earth object in the search field on April 25," Christensen said. "That proves right there we can do both things at the same time."

Scientists hope that as the survey continues to run, and as LIGO and Virgo identify new targets, the Catalina Sky Survey will observe the optical signal of a merger event responsible for a gravitational wave. 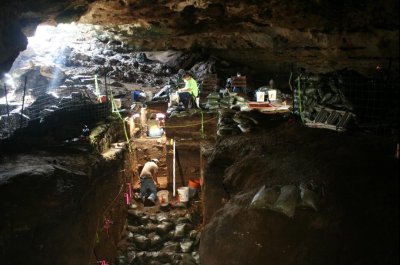