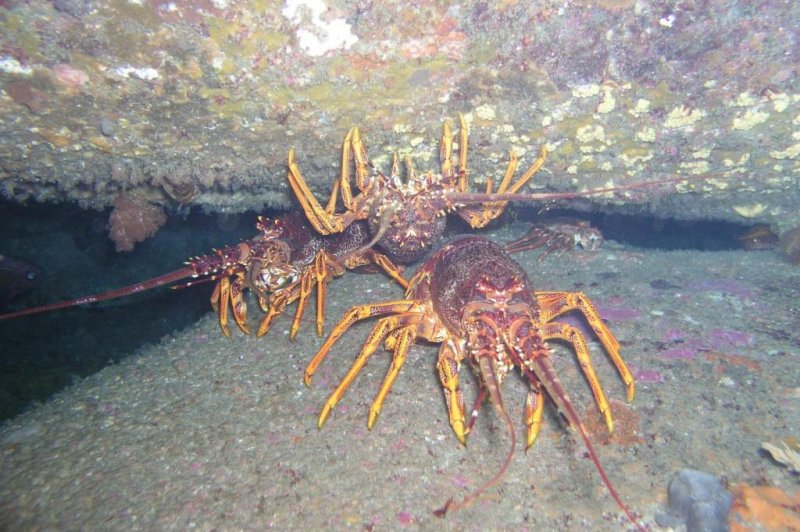 Rock lobsters are negatively impacted by seismic blasts, according to a new study. Photo by IMAS

July 25 (UPI) -- Whales and dolphins aren't the only species negatively affected by seismic surveys. According to a new study, the sensory organs and righting reflexes of rock lobsters are harmed by seismic air guns.

For the study, researchers in Australia blasted seismic air gun noise in Tasmania's Storm Bay. When scientists examined rock lobsters impacted by the seismic blasts, they observed damage to the crustacean's sensory organ, the statocyst, as well as specimens' reflexes.

"While the impact of air guns on whales and fishes has been relatively well-studied, the effects on marine invertebrates such as lobsters, crabs and squid remain poorly understood," Ryan Day, researcher with the Institute for Marine and Antarctic Studies at the University of Tasmania, said in a news release. "We chose to study the impact on rock lobster because they are a high value fishery and an important part of global marine ecosystems."

Day and his colleagues published the results of their research this week in the journal Proceedings of the Royal Society B.

"Previous studies have shown that the statocyst, a sensory organ on a lobster's head, is critical in controlling their righting reflex, enabling them to remain coordinated and evade predators," Day said. "After exposing lobsters to the equivalent of a commercial air gun signal at a range of 100 to 150 meters, our study found that the animals suffered significant and lasting damage to their statocyst and righting reflexes."

Researchers analyzed lobsters before and after the seismic tests to confirm the air gun blasts were to blame for the negative health impacts. Tests also showed the impacts of the seismic tests persisted for a year.

Scientists didn't observe how the behavior of the compromises lobsters was impacted, but Day and his colleagues suggest lobsters with damaged statocysts would likely struggle to function normally in the wild.

The latest findings add to the mounting body of research that suggests invertebrates are negatively affected by marine seismic surveys.

"In recent years our research team has also looked at the impact of seismic surveys on lobster embryos, scallops and zooplankton, said Jayson Semmens, the study's principal investigator and an associate professor at the University of Tasmania. "Such studies are important to enable government, industry and the community to make informed decisions about how such activities can best be conducted while minimizing negative outcomes for fisheries and ecosystems globally."