Because hot Jupiters orbit so close to their host stars, their magnetic fields interact with their sun's emissions, as pictured in this illustration. Photo by NASA/ESA/A. Schaller for STScI

Unlike Jupiter, which is positioned in the outer solar system, hot Jupiters trace more intimate orbits. Their proximity to their host stars makes them "hot."

Of the thousands of exoplanets discovered by astronomers, a larger percentage are hot Jupiters. Astronomers theorized the gas giants boasted intense magnetic fields, but until now, scientists were unable to directly measure electromagnetic forces around hot Jupiters.

"Our study is the first to use observed signals to derive exoplanet magnetic field strengths," Evgenya Shkolnik, professor of space sciences at Arizona State University, said in a news release. "These signals appear to come from interactions between the magnetic fields of the star and the tightly orbiting planet."

Scientists have previously used radio observations to establish upper limits for the magnetic fields around hot Jupiters. In gas giants, magnetic fields are generated by the swirling movements of conducting materials in the planet's liquid-metalic core.

"We combined measurements of increased stellar emission from the magnetic star-planet interactions together with physics theory to calculate the magnetic field strengths for four hot Jupiters," said Wilson Cauley of the University of Colorado.

Researchers detailed their calculations this week in the journal Nature Astronomy.

"When this happens, energy can be released as the two fields reconnect, and this heats the star's atmosphere, increasing the calcium emission," Cauley said.

When scientists compared the results of their calculations with the predictions of magnetic field models, the figures were in agreement.

"We are pleased to see how well the magnitude of the field values corresponded to those predicted by the internal heat flux theory," said Shkolnik. "This may also help us work toward a clearer understanding of magnetic fields around temperate rocky planets."

The analysis showed the hot Jupiters' magnetic fields are surprisingly strong, several times greater than the magnetic field produced by Jupiter or Earth.

Science News // 15 hours ago
Medieval shoe trend brought 'plague' of bunions to Britain
Suffering for fashion is nothing new. Researchers in Britain have unearthed new evidence that stylish pointed shoes caused a "plague" of bunions in the late medieval period. 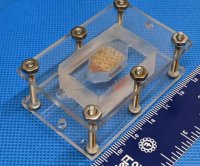