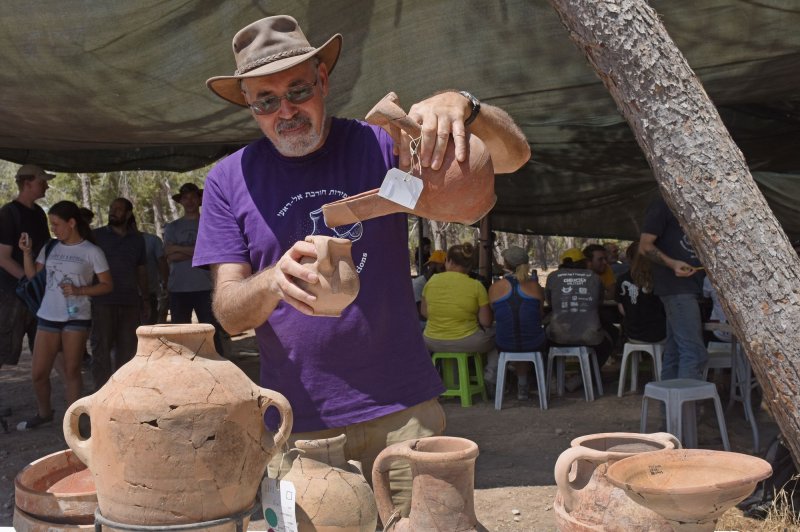 Professor Yosef Garfinkel, head of the Institute of Archeology at the Hebrew University, examines 3,000-year-old pottery vessels found at the site believed to be the biblical town of Ziklag, near the Israeli southern city of Kiryat Gat, Israel, Monday. Photo by Debbie Hill/UPI | License Photo

July 8 (UPI) -- An international team of archaeologists has discovered the remnants of an ancient settlement they believe to be the biblical city of Ziklag.

According to the Bible, David -- not yet a king -- sought refuge in Ziklag after fleeing the Kingdom of Israel and King Saul. Once in Ziklag, King Saul ended his pursuit of the young David. Later, David requested and was granted rule over Ziklag, having been anointed king in Hebron in the wake of Saul's death.

In 2015, archaeologists with the Israel Antiquities Authority, the Hebrew University in Jerusalem and Macquarie University in Sydney, Australia, began excavating the ancient site of Khirbet Al-Rai, situated near Kiryat Gat in central Israel.

On Monday, officials announced Khirbet Al-Rai as the remnants of Ziklag.

The books of Joshua and Samuel describe Ziklag as belonging to the Philistines, a group of people archaeologists believe hailed from the Mediterranean. The Philistines controlled much of present-day central and southern Israel.

"The name Ziklag is unusual in the lexicon of names in the Land of Israel, since it is not local Canaanite-Semitic," Yosef Garfinkel, head of the Institute of Archaeology at the Hebrew University, said in a news release. "It is a Philistine name, given to the town by an alien population of immigrants from the Aegean."

The excavations at Khirbet Al-Rai revealed large stone structures, the remnants of an ancient city dating to between the 12th and 11th centuries B.C. Artifacts found among the city remains, including statues, vessels and other types of pottery, match the characteristics of Philistine culture found among the ancient cities of Ashdod, Ashkelon, Ekron and Gath.

Above the city remains, archaeologists found a rural settlement dating to the era of King David.

"This settlement came to an end in an intense fire that destroyed the buildings," according to an IAA news release. "Nearly one hundred complete pottery vessels were found in the various rooms."

Researchers recovered dozens of ceramic vessels from the remains of the burned buildings.

"The great range of complete vessels is testimony to the interesting everyday life during the reign of King David," according to the IAA. "Large quantities of storage jars were found during the excavation -- medium and large -- which were used for storing oil and wine."

According to the Bible, Ziklag was ransacked and burned by a group of desert nomads called the Amalekites.

As many as 12 ancient city sites have previously been proposed as the remains of Ziklag, but none of them featured evidence of continuous habitation, with Philistine remains buried beneath artifacts dating to the era of King David.

Science News // 19 hours ago
Scientists believe second asteroid may have contributed to dinosaur extinction
Aug. 18 (UPI) -- Scientists now believe more than one asteroid could have impacted Earth, contributing to the extinction of dinosaurs, according to new research.

Science News // 1 day ago
'Cannibal' solar burst headed for Earth could make northern lights visible in U.S.
Aug. 18 (UPI) -- A plume of "dark plasma" from the sun is expected to be overtaken by a "cannibal" solar burst that may cause an aurora display visible throughout large portions of the United States on Thursday.

Science News // 1 day ago
Spacewalk cut short by equipment failure
Aug. 17 (UPI) -- A Russian astronaut's spacewalk outside the International Space Station was cut short Wednesday after experiencing an electrical problem with his suit.

Science News // 1 day ago
Northern lights could glow over northern U.S.
Wednesday night will feature the rare opportunity to see the glow of the aurora from the United States, but cloudy conditions could obscure the sky during the height of the celestial light show.

Science News // 1 day ago
National Academy of Sciences sanctions White House climate official for ethics violation
Aug. 17 (UPI) -- The U.S. National Academy of Sciences has sanctioned White House official Jane Lubchenco, and barred her from working on publications or programs for the academy for five years, for violating its ethical code of conduct.

Science News // 2 days ago
Watch Live: NASA Artemis 1 rocket begins pre-launch rollout
Aug. 16 (UPI) -- NASA plans to roll out its Space Launch System rocket on Tuesday ahead of its premiere flight set for later this month. The uncrewed test flight is part of the plan to return man to the moon.

Scientists believe second asteroid may have contributed to dinosaur extinction