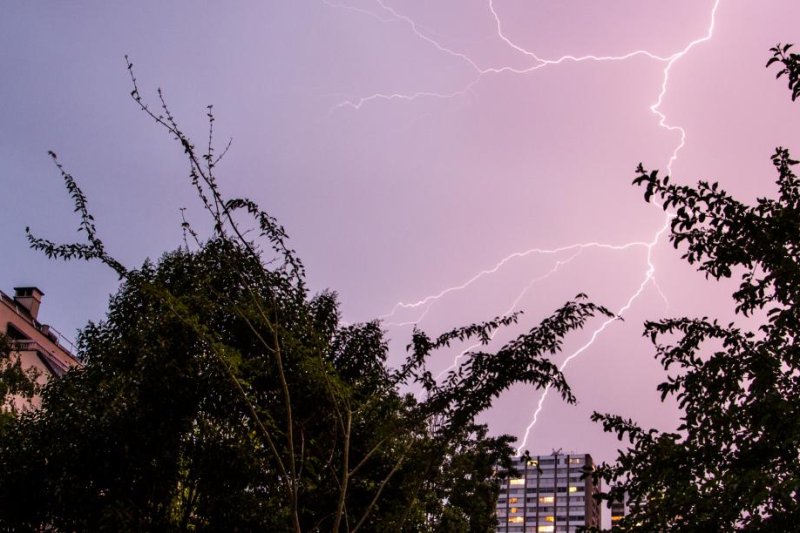 To study the link between lightning and gamma rays, searchers in Japan have installed a network of radiation detectors on the roofs of local schools and businesses. Photo by Yuuki Wada/University of Tokyo

Over the last several years, researchers at the University of Tokyo worked with schools and businesses in Kanazawa, Ishikawa Prefecture, in central Japan, to install a network of radiation monitors for studying lightning.

"Forever, people have seen lightning and heard thunder. These were the ways we could experience this power of nature," University of Tokyo graduate student Yuuki Wada said in a news release. "With the discovery of electromagnetism, scientists learned to see lightning with radio receivers. But now we can observe lightning in gamma rays -- ionizing radiation. It's like having four eyes to study the phenomena."

Both phenomena are fueled by differences in charges within cloud layers. Stark charge disparities cause electrons to accelerate to nearly the speed of light. The electrons, traveling at relativistic speeds, briefly slow down as they pass by the nuclei of nitrogen atoms. When they do so, they emit a gamma ray. Scientists refer to these gamma rays as bremsstrahlung radiation.

"During a winter thunderstorm in Kanazawa, our monitors detected a simultaneous TGF and lightning strike. This is fairly common, but interestingly we also saw a gamma-ray glow in the same area at the same time," said Wada. "Furthermore, the glow abruptly disappeared when the lightning struck. We can say conclusively the events are intimately connected and this is the first time this connection has been observed."

Scientists are still trying to decipher the dynamics of thunder clouds and figure out what exactly causes lightning to strike. Gamma ray phenomena could offer insights.

RELATED Record thunderstorm had electric potential of 1.3B volts

Researchers involved in the latest study, published in the journal Communications Physics, expect to expand their network of radiation monitors and collect more gamma ray observations in the near future -- observations they hope help explains the role of gamma rays in triggering lightning.

The ongoing study of the relationship between thunderstorms and gamma rays could even have implications for the work of paleontologists.

"Paleontologists who study life from the last 50,000 years or so use a technique called carbon-14 dating to determine the age of a sample. The technique relies on knowledge of the levels of two kinds of carbon, carbon-12 and carbon-14," said Wada. "It's commonly thought carbon-14 is created by cosmic rays at a roughly constant rate, hence the predictive power of the technique. But there's a suggestion thunderstorms may alter the ratio of carbon-12 to carbon-14, which may slightly change the accuracy of or calibration required for carbon-14 dating to work."