Astronauts, not robots, essential to getting answers on the moon

Robotic spacecraft can collect data vital to scientists' quest to unravel the moon's mysteries, but well-trained astronauts -- and their cognitive abilities -- can see and do things robots can't. 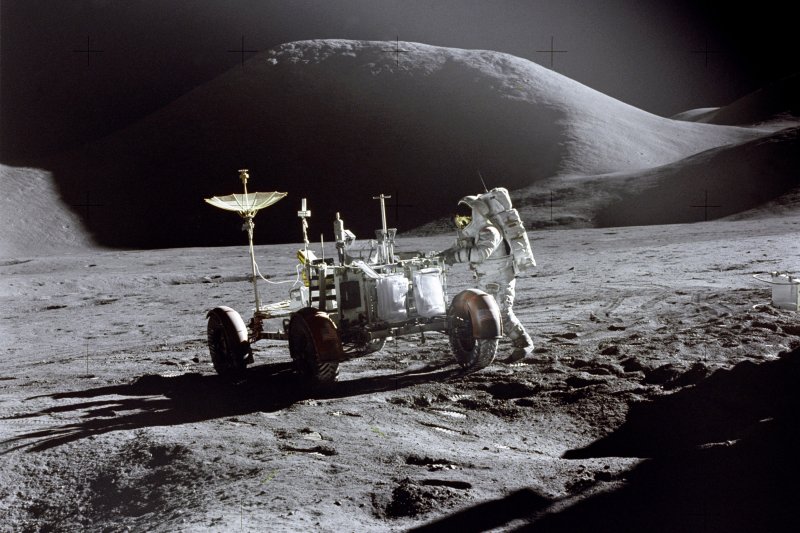 June 24 (UPI) -- The scientific legacy of the Apollo program, including the first manned mission to the moon, is considerable. But 50 years later, there's a lot lunar scientists still aren't sure of -- questions unanswered and models in need of tweaks.

The moon promises not only to reveal secrets about itself, but also to provide answers to broader planetary science inquiries.

"The moon is the best and most accessible place in the solar system to explore fundamental processes of the solar system's origin and evolution," David Kring, senior staff scientist at the Lunar and Planetary Institute, told UPI. "And it is only three days away."

Five decades after Neil Armstrong and Buzz Aldrin returned with a cache of lunar rock samples, inspiring decades of discoveries, scientists are hoping the planned return of NASA astronauts to the moon will reinvigorate lunar research. Of course, NASA and other space agencies have continued to study the moon using both space telescopes and ground observatories. Over the last decade, China has put three landers on the lunar surface -- the most recent on the far side of the moon earlier this year.

Robotic spacecraft have collected and will continue to collect data vital to scientists' quest to unravel the moon's mysteries. But NASA's promise to return astronauts to the moon would certainly prove a boon to the agency's lunar science program.

"Well-trained astronauts exploring a complex geologic terrain can produce extraordinary results beyond the reach of any robotic asset," Kring said. "They have the capacity to observe, process those observations, and make decisions that ensure mission objectives are met in a time-efficient manner. Apollo demonstrated the intrinsic advantages of human explorers and, simultaneously, their inspirational value."

Unknowns of the moon

RELATED Apollo 11 at 50: Mission's scientific legacy was just getting to the moon

What do lunar and planetary scientists want to know?

Many scientists suggest samples from the moon's basins could confirm if and when the Late Heavy Bombardment occurred. Models of the solar system's early evolution show a reorganization of the inner planets triggered an increase in collisions between asteroids and terrestrial planets.

"We know that the last of the huge basins formed more than 3.5 billion years ago, but what we don't know is whether the number of impacts on the moon was steadily declining from the time of its formation, about 4.5 billion years ago, or whether there was a relatively quiet period followed by a late heavy bombardment," said Tim Swindle, director of the Lunar and Planetary Laboratory at the University of Arizona.

While the rock samples collected during the Apollo missions can offer relevant context, new samples from bigger, older lunar basins -- like the South Pole Aitken -- are needed to shed light on the timing of the late heavy bombardment.

"By returning impact melt from the South Pole Aitken basin and other large basin impacts, like Nectaris, we could be able to answer the question" of the late heavy bombardment, said Clive Neal, professor of lunar science at Notre Dame University. "However, we need to know what an impact melt actually looks like so we return the correct samples for dating in terrestrial labs. I think we can help there in terms of what we have learned from the Apollo samples."

The Late Heavy Bombardment is one of several hypotheses that scientists could interrogate using fresh samples and data collected by new lunar missions. An outpouring of big ideas followed the return of the Apollo lunar samples, including the giant impact hypothesis, the lunar magma ocean hypothesis, the lunar cataclysm hypothesis and the magmatic epoch hypothesis. Most recently, surveys of the Apollo samples inspired new ideas about the origin and evolution of water in the Earth-moon system.

"We need to test those ideas with new samples collected at landing sites specifically selected to address them," Kring said.

"That includes volcanism, which may have been so intense that it created a transient atmosphere around the moon more than 3 billion years ago," Kring said. "Teasing that history from any polar ice deposits will be fascinating."

Scientists are keen to understand whether the deposits of volatiles observed on the rims of craters and basins are superficial or evidence of large reserves.

"Are lunar volatile resources actually reserves? If they are, this has huge implications for interplanetary transport, human exploration, commercial involvement, and science," Neal said. "If these are reserves and permanent human presence on the moon is the goal, we can truly develop the cislunar economy."

The list of unanswered lunar science questions is long. New missions to the moon could help scientists better understand the lunar interior, its impact history, the evolution of its atmosphere and the satellite's volatile cycles. But perhaps the biggest unsolved mystery is the moon's formation.

Scientists mostly agree that the moon was forged by a giant impact between Earth and a planetary body the size of Mars. But the details of such a collision are murky.

"For the last 35 years, we've had a basic framework that most scientists have agreed on, the giant impact theory, but there are still enough questions that no specific model has satisfactorily solved them all," Swindle said.

By comparing the chemical composition of lunar rocks and terrestrial rocks, specifically the relative isotopic composition of many elements, and of how strong it should be, researchers could hone in on a more precise model.

"I don't think that there is a specific mission that will answer the question, but having more samples of areas like lunar highlands far away from the sites that the Apollo missions sampled would help a lot," Swindle said.

Robotic missions to the moon can provide tremendous insights into the queries highlighted by lunar and planetary scientists, but despite its proximity to Earth, the moon remains a mysterious place -- the kind of place where human cognition would be invaluable.

"Humans are extremely good at picking out the rock that is just a little bit different than the others -- there are several examples from Apollo -- so astronauts will find the interesting ones far more rapidly than a robotic mission, even with the best artificial intelligence we have," Swindle said.

The list of lunar science questions that could be answered with the help of astronauts is long, but it is also incomplete. New missions are certain to inspire new questions and new ideas on how to solve the moon's mysteries -- where to look, what to measure and more.

"It is important to understand that most of the moon remains unexplored," Kring said. "Thus, while we will be testing previously developed big ideas, we are surely going to be surprised with an extraordinary set of new findings. The moon is a land of discovery just waiting to be explored."