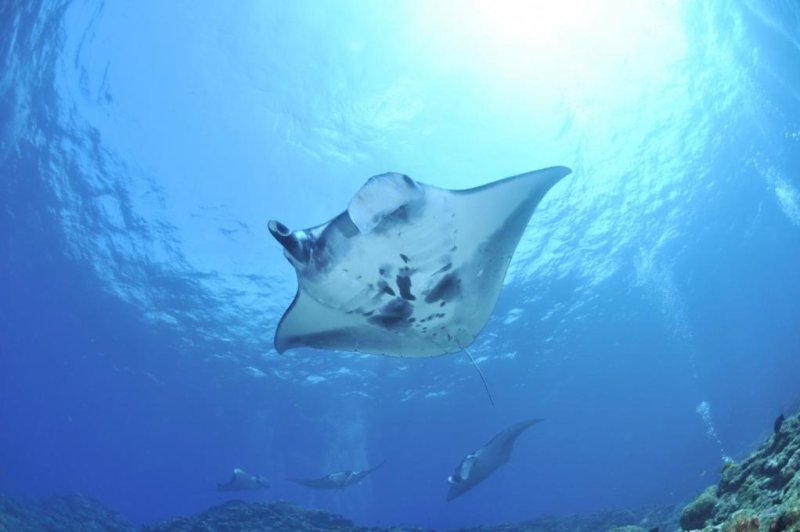 The Maldives hosts the largest reef manta ray population in the world. Photo by pxhere

The waters surrounding the islands of the Republic of Maldives host the world's largest population of reef manta rays, but the ray population varies greatly.

"Manta rays are one of the most beautiful and iconic creatures that swim in our oceans," Gareth Pearce, a researcher with the department of veterinary medicine at the University of Cambridge, said in a news release. "Unfortunately, like many animals, their future is threatened. They are increasingly fished, both deliberately and through bycatch, and their populations are now at risk."

Manta rays stay in constant motion, pulling water across their gills. The close relatives of sharks and rays, they follow ocean currents that carry the plankton they eat. But much of the manta ray's behavior remains poorly understood, including its reproductive patterns.

To better understand how breeding behavior drives population fluctuations, scientists developed a special ultrasound scanner. Divers hold the scanner a few inches away from the manta rays. Using the device, researchers were able to image the reproductive organs of manta rays without disturbing them.

"Using the scans, we're able to determine the stages of maturity and when animals are becoming reproductively active," said Pearce. "We can observe the stages of pregnancy, the development of the fetus and importantly, whether an animal maintains that pregnancy and gives birth to a live animal."

Because the animals are common in the waters of the Maldives, scientists were able to track and image the same individual manta rays over a series of days and weeks.

Pearce and his colleagues hope their work will explain why manta rays breed some places but not others. Insights into manta ray breeding behavior will help conservationists better protect the species.

"Ultimately, our work aims to inform the conservation of manta rays both in the Maldives and other areas of the world, enabling the populations to survive and hopefully flourish," said Pearce. "Our hope is that this research project will contribute to conserving the species for future generations."