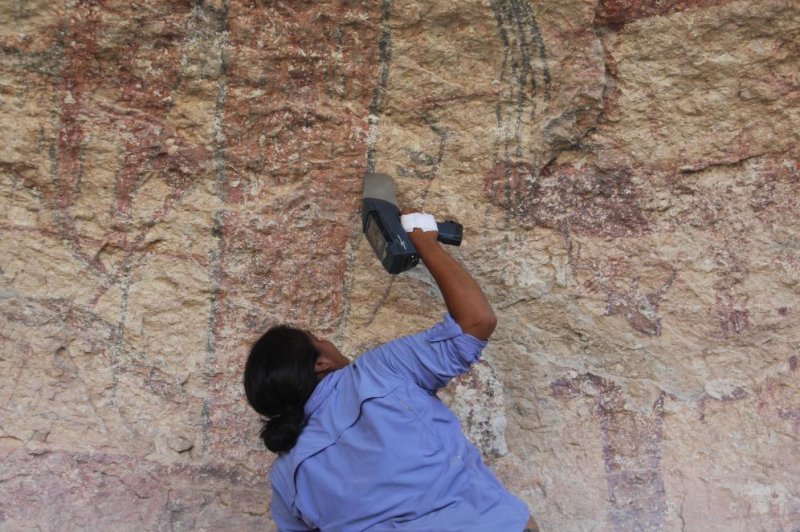 Researchers used an X-ray gun to analyze dozens of spots on a large mural painted on a limestone canyon wall in Texas. Photo by Shumla Archaeological Research and Education Center

April 1 (UPI) -- Researchers are gaining new insights into the history of ancient rock and cave art in Texas thanks to the deployment of a portable X-ray machine.

Traditionally, archaeologists have relied on sampling efforts, chipping away the bits of the stone surface, to better understand the creation process and meaning behind ancient rock and cave art. Unfortunately, sampling permanently damages the artwork.

"In this particular work, we used a technique called portable X-ray fluorescence spectroscopy, in which a handheld instrument can be carried to a site and used right there, on the spot," Karen Steelman, lead researcher at science director of the Shumla Archaeological Research and Education Center, said in a news release. "It gives you the elemental analysis of a specific material, and is the first step in figuring out how ancient artists used different materials to make their paintings."

Steelman and her colleagues tested their new instrument and analysis technique on a 105-foot wide mural found at the Rattlesnake Canyon Site along the Rio Grande. Researchers used the portable X-ray machine, which looks like a radar gun, to measure 138 areas on the mural where archaeologists estimated black, white, red and yellow pigments overlapped. Scientists also used the X-ray gun to analyze the geological composition of unpainted limestone.

The analysis revealed the elemental makeup of the pigments, as well as the pigments' layering patterns. The data revealed previously unseen black pigment hiding beneath layers of red.

The sophisticated pigment layering practices found at the site are similar to painting patterns observed among other religious murals at Lower Pecos sites in Texas, confirming the cultural complexity of the region's hunter-gather society.

RELATED The Ancestral Puebloans were getting tattoos at least 2,000 years ago

The people that occupied the Lower Pecos Canyonlands between 2500 BC and 500 AD left behind a rich cultural legacy, including well-preserved food remains, colorful rock art, grass-lined beds, painted deer bones and more. The cultural artifacts found among the region's canyons are some of the oldest in North America.

Steelman and her colleagues are scheduled to present their results of their rock art analysis on Tuesday at the annual American Chemical Society meeting. Presentations can be watched live on YouTube.