Evidence of deep groundwater on Mars detailed in new study 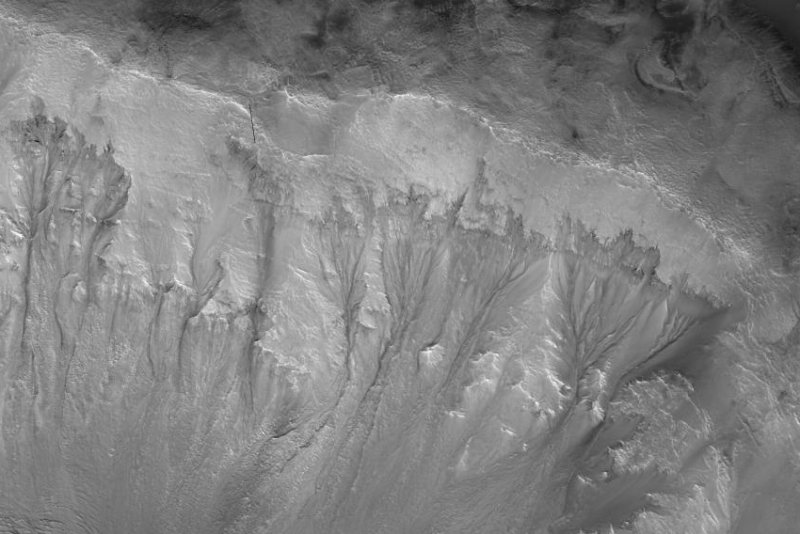 New research suggest deep groundwater on Mars could explain the phenomenon known as recurrent slope linae, the stream-like markings photographers here on the wall of the Palikir Crater. Photo by NASA/JPL/University of Arizona

March 28 (UPI) -- Mars may still host active groundwater deep beneath its surface, according to a new study by researchers at the University of Southern California.

After closely analyzing a phenomenon known as "recurrent slope linea," estimated to be the dry signatures left by short-lived streams, scientists determined deep groundwater on Mars is likely not relegated to the poles.

Researchers have previously argued surface water activity accounts for the recurrent slope linea found on the walls of Martian craters.

"We suggest that this may not be true," Essam Heggy, a scientist working on ESA's Mars Express Sounding radar experiment, called MARSIS, said in a news release. "We propose an alternative hypothesis that they originate from a deep pressurized groundwater source which comes to the surface moving upward along ground cracks."

RELATED NASA rover may have visited ancient Martian sea in 1997

Heggy is an expert on groundwater systems, and his observation of deep-lying groundwater in otherwise dry places, including in the North African Sahara and in the Arabian Peninsula, led him to consider the possibility that similar groundwater activity is present deep beneath the Martian surface.

Scientists have previously used electromagnetic echoes sent from radar-probing spacecraft orbiting Mars to search for water beneath the surface of the Red Planet. So far, such surveys have only turned up evidence of groundwater beneath Mars' southern pole.

Heggy and Abotalib hypothesize that a deeper and more extensive groundwater systems stretches far beyond Mars' south pole. The duo detailed their hypothesis in a paper published Thursday in the journal Nature Geoscience.

The authors of the new paper hope their findings inspire ESA, NASA and other space agencies to develop technologies capable of exploring deep Martian fissures and detecting deep-lying water.

"It helps us to understand the similarities to our own planet and if we are going through the same climate evolution and the same path that Mars is going," Heggy said. "Understanding Mars' evolution is crucial for understanding our own Earth's long-term evolution and groundwater is a key element in this process."