"Pollinators are declining worldwide yet are essential for maintaining the stability of the ecosystem and for pollinating crops," researcher Yannick Wurm said. 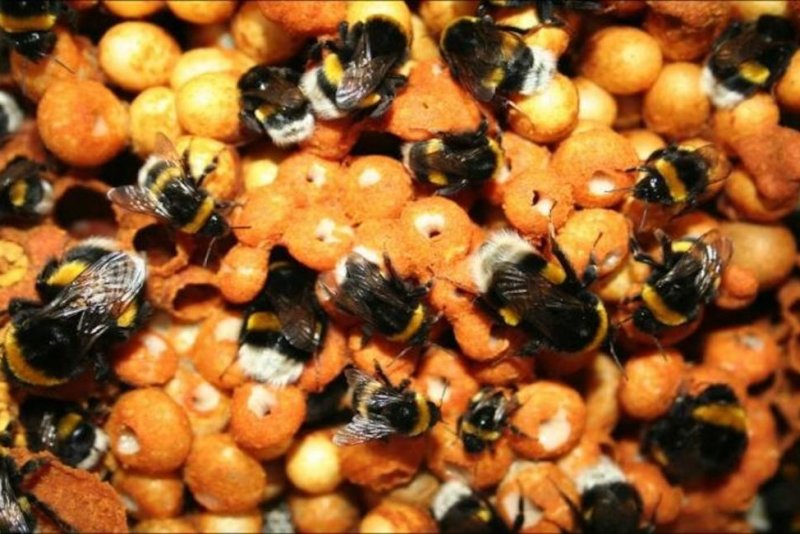 Scientists measure the effects of insecticides on the activity of genes in buff-tailed bumblebees. Photo by TJ Colgan

March 7 (UPI) -- For the first time, scientists have taken a biomedical approach to measuring the impacts of pesticides on bumblebees and their genes.

Their findings, published in the journal Molecular Ecology, suggest insecticides alter dozens of genes responsible for a diverse array of biological processes.

Most studies measuring the impacts of pesticides on bees focus on bee behavior and health outcomes, productivity and mortality. The new research looked at the effects of insecticides inside the bumblebee at the molecular level.

"Governments had approved what they thought were 'safe' levels but pesticides intoxicate many pollinators, reducing their dexterity and cognition and ultimately survival," Yannick Wurm, an evolutionary biologist at Queen Mary University of London, said in a news release. "This is a major risk because pollinators are declining worldwide yet are essential for maintaining the stability of the ecosystem and for pollinating crops."

For their experiments, scientists exposed Bombus terrestris colonies to one of two pesticide compounds, clothianidin or imidacloprid. The insecticides were applied at field-realistic concentrations, and researchers controlled for colony social environment and worker age.

The Bombus terrestris bumblebee, or buff-tailed bumblebee, is one of Europe's most common bumblebee species.

Scientists hypothesize that at least some of the genes sped up as part of the bumblebee's attempt to detoxify, but many of the alterations likely offer direct evidence of intoxication caused by exposure.

Only 17 genes in queen bumblebees were altered by exposure, with 16 of the 17 genes increasing their activity levels.

RELATED Mites, not a virus, are the main threat to bees, study finds

"This shows that worker and queen bumblebees are differently wired and that the pesticides do not affect them in the same way," said Joe Colgan, researcher at Queen Mary University of London and first author of the new study. "As workers and queens perform different but complementary activities essential for colony function, improving our understanding of how both types of colony member are affected by pesticides is vital for assessing the risks these chemicals pose."

In followup studies, scientist hope to apply the same biomedical approach more broadly and examine the impacts of different pesticides on a variety of bee species and other pollinators.

"We examined the effects of two pesticides on one species of bumblebee," Colgan said. "But hundreds of pesticides are authorized, and their effects are likely to substantially differ across the 200,000 pollinating insect species which also include other bees, wasps, flies, moths, and butterflies."

Science News // 10 hours ago
Mars, meteors: December's must-see astronomy events
December features the longest nights of the year, and the final month of 2022 will be packed with astronomical happenings ranging from the most active annual meteor shower to the best views of Mars since 2020.

Science News // 1 day ago
NASA awards contract for 3D-printed construction on moon, Mars
Nov. 29 (UPI) -- Texas-based startup ICON has landed a five-year, $57 million contract from NASA to 3D-print landing pads, roads and shelter on the moon and on Mars.