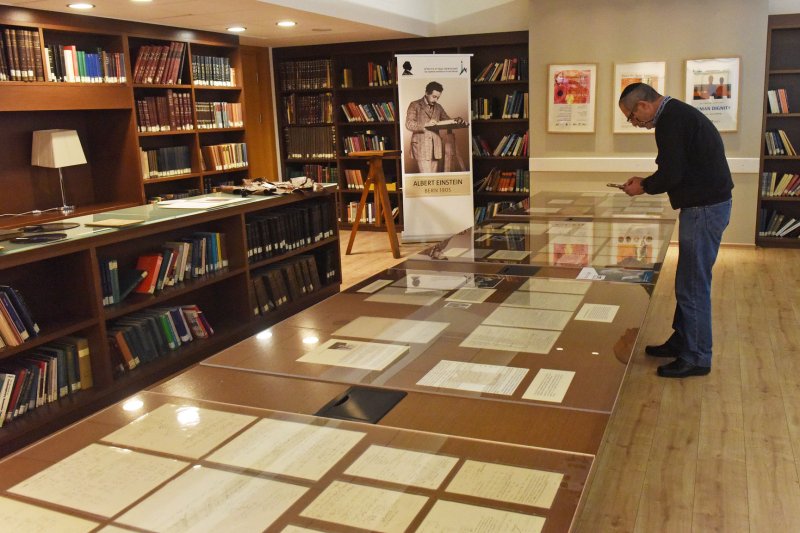 A visitor looks at a display of newly unveiled manuscripts of Albert Einstein's, both personal and scientific, at the Hebrew University in Jerusalem on Wednesday. Photo by Debbie Hill/UPI | License Photo

A close-up of one of Albert Einstein's iconic pipes and a leather jacket, manufactured by Levi Strauss, is displayed, with 110 newly unveiled manuscripts at the Hebrew University in Jerusalem. Einstein wore the jacket on the cover of Time magazine and it was later reacquired by Levi in an auction by Christie's of London for over $146,000. Photo by Debbie Hill/UPI | License Photo

A close-up of a display of newly unveiled manuscripts of Albert Einstein's the Hebrew University in Jerusalem. Einstein was one of the founders of the university in 1918 and willed his personal archives and rights to his works to it. Photo by Debbie Hill/UPI | License Photo

The manuscripts shed light on the life and times of the scientist, who is the father of the theory of relativity. Photo by Debbie Hill/UPI | License Photo

A birthday cake in honor of Albert Einstein's 140th birthday sets outside a room displaying Einstein's newly unveiled manuscripts, both personal and scientific, at the Hebrew University in Jerusalem, at a celebration on the eve of Einstein's 140th birthday, March 6, 2019.The manuscripts shed light on the life and times of the scientist, who is the father of the theory of relativity, and considered the greatest scientist of all times. Einstein was one of the founders of the Hebrew University in 1918 and willed his personal archives and rights to his works to the university. Photo by Debbie Hill/UPI | License Photo

March 6 (UPI) -- Dozens of new manuscript pages composed by Albert Einstein were unveiled at the Hebrew University of Jerusalem on Wednesday. The new collection of documents also features several letters and notes penned by the famed scientist. Most of manuscript pages have never been seen in public before.

Einstein, winner of the 1921 Nobel Prize in Physics, is perhaps best known for his general theory of relativity, which transformed particle physics and cosmology, but his discoveries in the field of physics were many. His theories inspired the creation of lasers, nuclear power, fiber optics and many more technologies still in use.

Einstein was also instrumental in the founding of the Hebrew University of Jerusalem, which houses the physicist's archives -- archives that now feature a new collection.

"We at the Hebrew University are proud to serve as the eternal home for Albert Einstein's intellectual legacy, as was his wish," Hanoch Gutfreund, archives director and professor at the university, said in a news release.

The new collection features 84 manuscript pages containing mathematical derivations written between 1944 and 1948. Many of the research notes and calculations lack context, but nonetheless offer insights into the scientist's thinking. The collection also includes an unpublished appendix to a scientific paper describing the physicist's "unified theory," one of many attempts by Einstein to describe all the forces of nature with a single theory -- unifying the theories describing electromagnetism and gravity.

In addition to scientific notes, Hebrew University archivists unveiled several letters written by Einstein to his close friend and fellow scientist, Michele Besso. The letters feature Einstein's thoughts on religion, politics and family matters, among other subjects. Another document in the new collection, a 1935 letter addressed to his son Hans Albert, reveals Einstein's growing worries about the rise of the Nazis and Europe's geopolitical instability.

The new documents were purchased from a private collector in North Carolina using funds from a philanthropic gift provided by the Crown-Goodman Family Foundation.

Researchers are working on digitizing the documents, as well as providing context to the scientific notes and mathematical formulas.

Alongside the newly displayed objects, archivists showcased several unique Einstein artifacts, including a few of Einstein's personal music records, as well as the leather Levi Strauss jacket the physicist wore on the cover of Time Magazine. The jacket was later bought by Levi in a Christie's auction for $146,000. 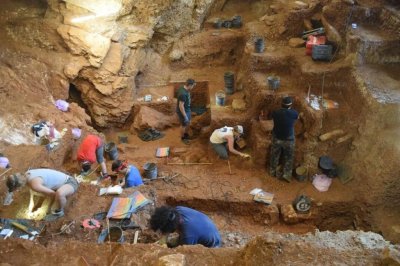